A power point presentation was made on the occasion explaining various initiatives of NTCA.In his address, Shri Bhupender Yadav underlined the need to have at least three meetings of NTCA in the first week of April, August & December every year. He said while tiger continues to be an endangered species and the situation calls for adopting as well as active management. He added that for effective management of tiger population it is imperative to have reliable estimate of tiger number at Tiger Reserve & Landscape Level.

The 5th cycle of All India Tiger Estimation which is currently underway will help in taking correct policy decision. The minister said we have 51 Tiger Reserves in the country and efforts are being made to bring more areas under Tiger Reserve network. The minister said that the tiger reserves are not just for tigers because more then 35 rivers originates from these areas which are crucial for water security.

Referring to poaching the minister said that air gun problem in north eastern states is an issue that states & UT have been advise by the ministry for organising awareness program so that people can surrender their airguns.

As part of effective regulation of tourism activity in the Tiger Reserves, the minister said that there should be one core area which should be sacrosanct and vehicular movement in the reserve being one way.

Tiger Conservation efforts in the Indian context have the community at its centre, hence continuous efforts are being made for involvement of local communities in protection and Eco-tourism activities.

The Minister also informed that today 14 Tiger Reserves have been accredited under CA|TS and NTCA is working on getting other Tiger Reserves evaluated for CA|TS accreditation, the minister also said there is need for vision plan to put Tigers on assured path of recovery and conservation and suggested that six committees be formed so that they can visit 2 Tiger Reserves and study various aspects and problems to help in formulating better policy.

The Minister said that Prime Minister is keen on protection and conservation of 7 major big cats including Cheetah numbering 50 over a period of 5 years will be introduced in various parks. 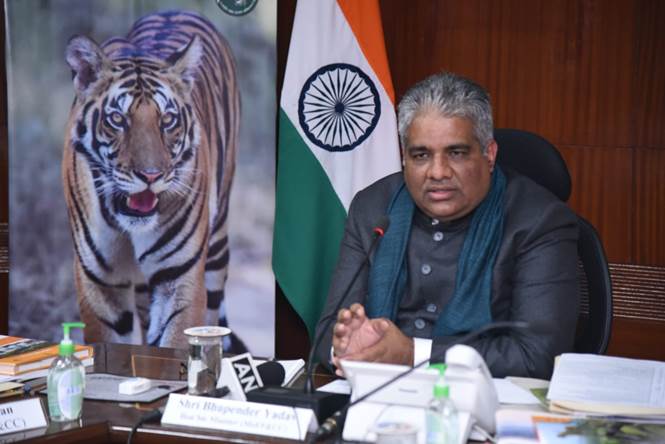 At the meeting the environment minister unveiled the Action Plan for introduction of Cheetah in India, that has become extinct in independent India.

The cheetah that became extinct in independent India, is all set to return.

Launched an action plan for reintroduction of cheetah in India at the 19th meeting of the National Tiger Conservation Authority. pic.twitter.com/Gs5k0ktMUb

The union minister also released a Water Atlas, mapping all the water bodies in the tiger bearing areas of India. Landscape wise information have been outlined in this water atlas which include, the Shivalik Hills and Gangetic plain landscape, Central Indian Landscape and Eastern Ghats, Western Ghats landscape, North Eastern Hills and Brahmaputra flood plains and Sundarbans.

During the course of the meeting Shri Yadav also informed that ‘India for Tigers: A Rally on Wheels’, organized under the aegis of ‘Azadi Ka Amrit Mahotsav’ by Ministry of Environment, Forest and Climate Change was a mega success. The rally saw an active involvement of diverse range of stakeholders – forest officials, school and college students, media persons, local communities, and representatives from NGOs etc.

Happy to inform that ‘India for Tigers: A Rally on Wheels’, organised as part of #AzadiKaAmritMahotsav was a mega success.

All 51 tiger reserves in 18 tiger range states participated, mobilising over 75,000 people pan-India, covering a distance of 7,500 km in 7 days. pic.twitter.com/7DQqh4aglZ