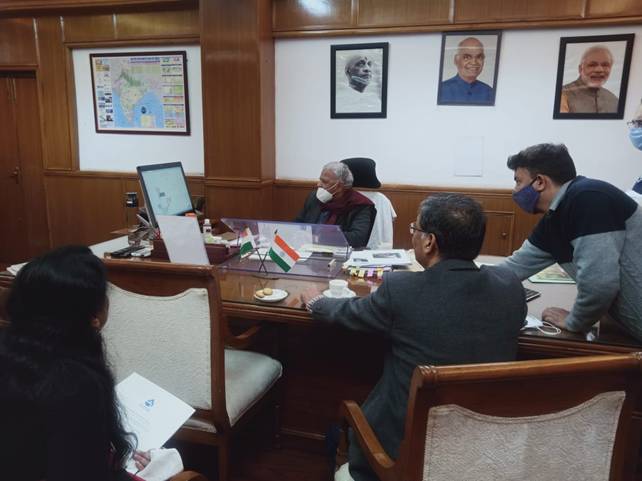 MOS Shri RattanlalKataria reviewed the progress of Jal Jeevan Mission, a Flagship programme of the Government. A presentation was made about the progress of the Mission by Addl Secretary, Department of Drinking water and sanitation –Shri Bharat Lal.

He informed that Goa is the first state to provide 100% piped connection and so far 27 Districts, 458 blocks, 33,516 Gram Panchayats, 66,210 villages have been declared to have achieved ‘HarGharJal’.Recently, Kurukshetra became the 27th District in India and 3rd in Haryana to have achieved this target.

He credited the success primarily to the people of these villages, Gram Panchayats, PaaniSamitis, public health authorities and other stakeholders.

States of Telangana, Gujarat, Haryana, UT of Puducherry are close to achieving 100% coverage. States which have made good progress in terms of increasing the coverage are – Himachal Pradesh, Bihar, Uttarakhand,Manipur, Mizoram, UT of Andaman and Nicobar.

For the Road Map ahead, 2 states ( Bihar, Telangana )and 2 UTs ( Puducherry, Andaman & Nicobar ) are expected to achieve 100% coverage in the year 2021. The Ministry is working to leverage Information Technology to provide latest and relevant information about the progress of this scheme in public domain through web portal and mobile apps.

MrKataria informed that the project is ushering in a silent revolution as water connections are being provided to all rural households without any discrimination or bias towards any particular caste, community, religion, race or color.

He added that “water is the elixir of life and it is unfortunate that even after 7 decades of Independence, women in the villages have to travel some distance to get potable water for fulfilling domestic needs of their families. This poses a threat to their security and dignity. “

The Jal Jeevan Mission is following an inclusive approach and mandates involvement of rural women in the Village Water and Sanitation committee/PaaniSamitis to ensure their participation in overall planning and preparation of the village action plans (VAPs). Under this mission, 5 women per village are trained to test the quality of water using Field Testing Kits (FTKs), so as to ensure supply of quality drinking water through these connections.