China has reopened China-Nepal Jilong border that had been closed since the spring after being damaged during an earthquake.

More than 400 trucks loaded with various goods have been stranded at Tatopani — the largest Nepal-China border port — for the past six months as the roads on both sides of the border were damaged due to the temblor that hit the country in April.

The China-Nepal border is located on the high-altitude ranges of Tibet, and the now-closed route connecting the two sides was badly damaged in the April quake, cutting off any possibility of movement of goods through land route. 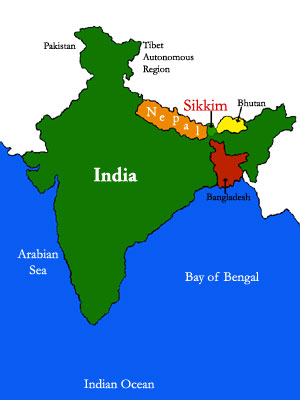 The Himalayan nation has faced problems bringing in supplies of food and fuel as routes from India have been blocked by protesters opposing Nepal’s new constitution.

The Madhesis — Indian-origin inhabitants of the southern plains — and Tharu ethnic groups are protesting for more representation in Nepal’s newly promulgated Constitution. And their protests have hit trade via Indian border check points.

The Madhesis oppose the new constitution because it divides Nepal into seven new states, with some borders slicing through the Madhesis’ ancestral homeland in the southern plains. The Madhesis, along with several other small ethnic groups, want the states to be larger and to be given more autonomy over local matters.

United Democratic Madhesi Front, the main Madhesi group, does not plan to ease its protests for the Dasain festival.

The Nepali government had asked China to hasten the reopening of two border crossings. They have been closed since two earthquakes killed more than 9,000 people in Nepal in April.

Nepal is located between India and China, which themselves have a festering border dispute. The two Asian giants have used aid and investment to court Kathmandu for years. China is also a close ally of Pakistan, India’s neighbour and arch-rival.

Nepal, a land-locked country bordered by India on the south, east and west, and China on the north, is dependent on its neighbours for transit and supplies.