Lagarde, the only candidate nominated for the post, was elected “by consensus”. 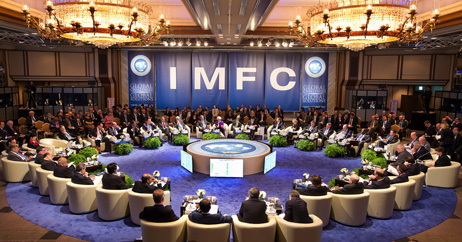 Lagarde, who took over the post in 2011, has overseen an easing of Europe’s sovereign debt crisis and has implemented changes to give greater influence in the Fund to emerging markets including China and Brazil.

Previously, she held various ministerial posts in the French government: she was Minister of Economic Affairs, Finance and Employment and before that Minister of Agriculture and Fishing and Minister of Trade in the government of Dominique de Villepin.

On 16 November 2009, the Financial Times ranked her the best Minister of Finance in the Eurozone.

Her appointment is the 11th consecutive appointment of a European to head the IMF. In 2014, Lagarde was ranked the 5th most powerful woman in the world by Forbes magazine.

During her first term, Lagarde won praise from developing countries for providing greater practical support for their efforts to recover from the financial crash and backing their demands for greater representation on the IMF board.

But the former French finance minister has clashed with the US Congress over its refusal to back reform and for her remarks in 2013 after the Obama administration was forced to implement spending cuts, which she considered “excessively rapid and ill-designed”.

Her reputation in Greece has also been battered by years of disputes over the country’s financial bailout, which the leftist Syriza government believes has brought the nation to its knees.

The IMF’s latest rescue mission runs out at the end of the month, by which time Greece is expected to make swingeing cuts to pensions, possibly sparking another dispute.