Home National Come and Be a part of India’s ‘Cinematic Kaleidoscope’ of ‘Collaborative diversity’:...

With many firsts to its credit, the 52nd edition of the International Film Festival of India has gotten off with a grand opening ceremony at the Dr. Shyama Prasad Mukherjee Indoor Stadium, in Panaji, Goa today, November 20, 2021. 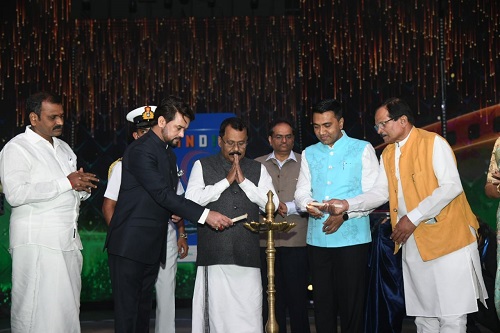 Welcoming film lovers to Goa which he recalled is celebrating its 60th year of independence, while the nation celebrates the 75th year of independence, the Union Minister for Information & Broadcasting and Youth Affairs & Sports, Shri Anurag Singh Thakur said that Azadi Ka Amrit Mahotsav is an opportunity for us to take a collective resolve to take the nation to new heights when we celebrate 100 years of our freedom. “This presents a unique opportunity for Indian cinema and incredible possibilities in content creation and dissemination at all levels on all platforms, in all regional languages, domestically as well as globally.” The Minister informed that with this perspective in mind, IFFI 52 has brought together a diverse bouquet of films and filmmakers from around the world. “There are many firsts at IFFI. For the first time ever, IFFI has allowed OTT platforms to come and showcase and present what they have produced in the past few years.”

The Minister informed that IFFI is embracing new technology and giving a platform to artists and industry to engage with each other, keeping up with the pace of change.

For the first time ever, films from five BRICS nations, namely Brazil, Russia, China, South Africa and of course India will be showcased through the BRICS Film Festival alongside IFFI. There are more than 300 films being showcased at IFFI. 148 international films from nearly 75 nations will be screened at the festival, informed the Minister.

As the country celebrates the 75th year of our hard-earned freedom, with Azadi Ka Amrit Mahotsav flags swaying in every state of the country, 75 young aspiring film makers have been handpicked from across the country to attend IFFI as special guests. The names of the winners have been announced at the opening ceremony today.

Speaking about the novel initiative, the Minister said: “For the first time ever, we are recognizing and mentoring promising 75 young minds, as   we celebrate 75 years of India’s independence. They have been chosen by the grand jury and selection jury after a meticulous selection process.”

The Minister informed that the youngest candidate is just sixteen years old, and that the list of 75 budding artists includes many who have been selected from various small towns and cities of India. 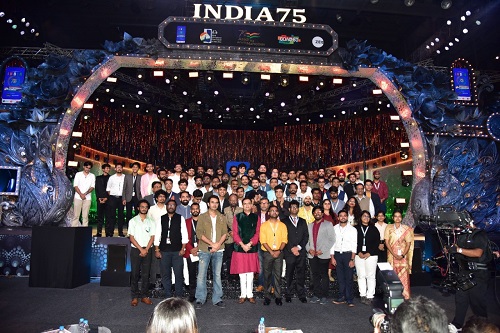 “Today, the world wants to hear the story of India”

The Minister said that India can captivate the world by narrating the India story – the story of rising, powerful and vibrant billion ready to lead the world the India way.

The Union Minister also highlighted the enormous employment potential of the sector. “The film and entertainment industry offers a huge employment opportunity as we leapfrog into the digital era of content and filmmaking, not to forget film archiving for future generations of film lovers.”

Noting that so many in filmmaking are young, the Minister said that the youth are the powerhouse for fresh content. “The media and entertainment sector builds on three unique propositions India offers – abundant and competent labour, ever-growing consumption expenditure and a diverse culture and linguistic heritage. Where else in the world do you have these powered by the extensive footprint of mobile, internet and digitalization?”

The Minister said that with this unique combination of connectivity, culture and commerce, India is poised to be at the epicentre of the cinematic ecosystem. “Today the India story is being written and defined by Indians.”

Addressing film lovers, Union Minister extended a passionate invitation to all film makers in India and across the world, to come and be a part of the cinematic kaleidoscope of collaborative diversity of the world’s largest democracy. “The India story is being written and defined by Indians. Our message to all film makers is this – come be a part of India’s ‘Cinematic Kaleidoscope’ of ‘Collaborative diversity’, that is set to take new strides as the voice of a rising, aspirational billion, gears up to lead and take centre-stage in this decade and beyond”. 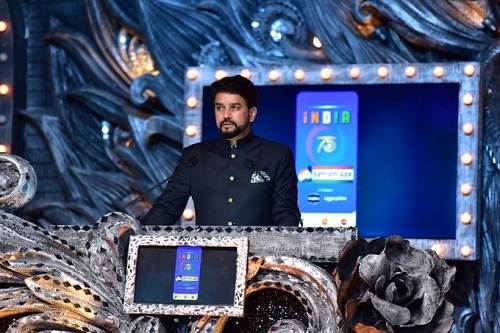 Shri Thakur appreciated “Dream Girl” Hema Malini, who has been presented the Indian Film Personality of the Year Award for 2021 today. He said the actor has enthralled generations of film lovers.

Praising the stalwart, Union Minister said: “Everyone has seen Hema Malini on screen, but the way she plays the role of a Member of Parliament and the way she brings forth to Parliament the issues of her Constituency Mathura, everyone should learn from that.”

Union Minister of State for Information & Broadcasting Dr. L Murugan said that IFFI allows the understanding of various social and cultural ethos and appreciation of world cinema. “Our actors bring alive legendary heroes and great events in the past.” 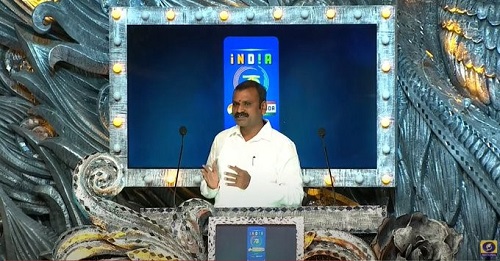 The Minister said that under the dynamic leadership of Prime Minister Shri Narendra Modi, India aims to become the attractive destination for filmmaking. “We have opened Film Facilitation Office, as a single point of contact to facilitate filmmakers.”

#IFFI allows the understanding of various social and cultural ethos, and appreciation of world #cinema

That’s why, with the initiative of @ianuragthakur ji, #IFFI has invited 75 young creative minds in the field of movies “To promote film shooting in the tourism state, we are giving single window clearance for enhancing film shooting in the state.” The Chief Minister congratulated the Prime Minister for showing the world that the nation is capable of vaccinating hundreds of crores of people at a fast pace. The CM said that in line with the goal of Aatma Nirbhar Bharat, Goa aims to achieve self-reliance in the field of film and entertainment, with the support of the union government.

Secretary, Ministry of Information & Broadcasting, Shri Apurva Chandra said that IFFI is the largest and best film festival of the country with a rich legacy of more than 50 years. “IFFI is a celebration of good films from India and all across the world at one location in a festival of nine days.” 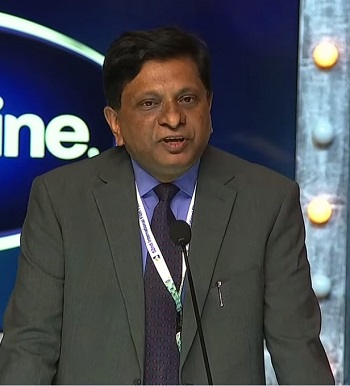 The Secretary explained that the festival has become bigger, despite the COVID-19 challenge. “Even though we are celebrating in hybrid mode, the film festival has become larger than any. We received 624 entries from 96 countries despite COVID-19, in comparison to 69 countries last year. 44 films from 18 different languages of India are being showcased at the Indian Panorama section, including a film in Dimasa language, which is not even in the 8th Schedule of the constitution. There are 12 world premieres, 7 international premieres and 64 national premieres, which shows that the love for IFFI is growing year on year. It shows that we have stood up to the challenge during these COVID times.“

#IFFI is the celebration of good films

Love for @iffigoa is growing internationally year on year

Speaking about the many firsts of IFFI 52, the Secretary informed that for the first time ever, films from five BRICS nations, namely Brazil, Russia, China, South Africa and of course India will be showcased through the BRICS Film Festival alongside IFFI. Further, as opposed to the precedent of a Country in Focus, the five BRICS countries are all focus countries at IFFI 52, allowing film lovers to be inspired by the cinematic excellence and contributions of all five countries.

The Secretary informed that for the first time in the history of IFFI, all major OTT platforms such as Netflix, Amazon, Sony and others, are participating in the film festival through exclusive Masterclasses, content launches and previews, curated film package screenings, and various other on-ground and virtual events. “The participation of OTT platforms will become a regular feature in future.”

The Secretary recalled that film lovers could gather together at the opening ceremony since the nation has been able to attain the stupendous achievement of administering 1.16 billion COVID-19 vaccine doses in a period of six months.