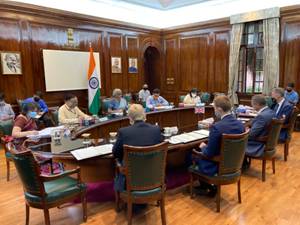 The Finance Minister stated that India is among a few G20 countries on track towards UNFCCC and Paris Agreement goals and has taken decisive actions to tackle climate change. Smt. Sitharaman mentioned that the Government is taking concrete steps and at appreciable speed to meet its commitments on the target of 450GW of renewable energy by 2030. 100GW of this renewable energy had already been achieved, She added. Among other important initiatives, the extensive work done on Hydrogen Energy Mission was highlighted.

With regards to ongoing discussions on climate change in various fora, Smt. Sitharaman referring to the dialogue on climate justice spoke about the need to bring a sense of compassion towards the poor. The Finance Minister expressed hope that the commitment made by the developed countries to provide $100 billion per year to developing countries would be achieved and was optimistic about a positive outcome on the new collective goals on finance in COP 26.