The Working Group, established by the FAO’s Commission on Genetic Resources for Food and Agriculture (CGRFA), functions to review technical issues, advise and make recommendations to the Commission and further implement the Commission’s programme related to AnGR at global level.

In the 12th Session of ITWG, implementation of the Global Plan of Action for Animal Genetic Resources, monitoring of AnGR diversity and preparing 3rd Country Report were reviewed.  Further agenda points on role of microorganisms relevant to ruminant digestion, role of genetic resources in mitigating and adapting to climate change; access and benefit-sharing for AnGR; digital sequence information and potential implications for the conservation and sustainable use of genetic resources were discussed. 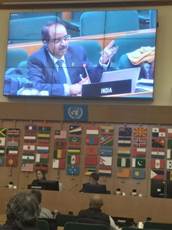