External trade recovered strongly in 2021-22 after the pandemic-induced slump of the previous year, with strong capital flows into India, leading to a rapid accumulation of foreign exchange reserves. The Economic Survey 2021-22, tabled in Parliament today by the Union Minister for Finance and Corporate affairs Smt. Nirmala Sitharaman says that the resilience of India’s external sector during the current year augurs well for growth revival in the economy. It however cautions that the downside risks of global liquidity tightening and continued volatility of global commodity prices, high freight costs, coupled with the fresh resurgence of COVID-19 with the new variants may pose a challenge for India during 2022-23.

The survey states that owing to the recovery of global demand coupled with revival in domestic activity, India’s merchandise exports and imports rebounded strongly and surpassed pre-COVID levels during the current financial year. The revival in exports was also helped by timely initiatives taken by the Government. The USA followed by the UAE and China remained the top export destinations in April-November, 2021, while China, the UAE and the USA were the largest import sources for India. Despite weak tourism revenues, there was significant pickup in net services receipts during April-December, 2021 on account of robust software and business earnings, with both receipts and payments crossing the pre-pandemic levels. 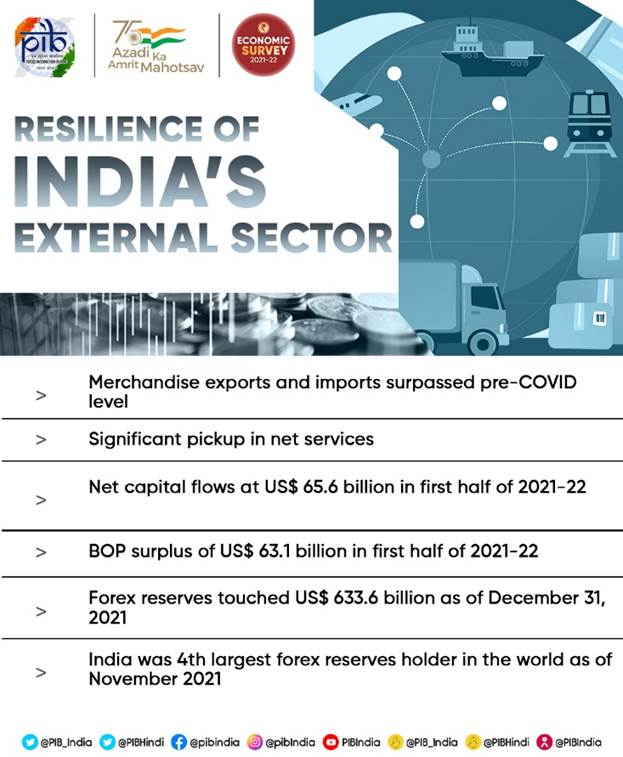 The Economic Survey notes that the first half of the calendar 2021 witnessed an acceleration in the global economic activity that lifted the merchandise trade above its pre-pandemic peaks. It says that India’s merchandise exports has followed the global trend and during April – December 2021 the merchandise exports grew by 49.7%, compared to corresponding period of last year and 26.5% over 2019-20 (April-December). The Survey mentions that India has already attained more than 75% of its ambitious export target of US$ 400 billion set for 2021-22, and is well on the track to achieve the target. It says that sharp recovery in key markets, increased consumer spending, pent up savings and disposable income due to announcement of fiscal stimulus by major economies, and an aggressive export push by the Government have bolstered exports in 2021-22. The rise in exports has been broad-based. India’s agriculture exports continue to do well, with export of agriculture and allied products growing by 23.2% during April- November 2021 over the corresponding period of last year. The Survey recommends that a push in the direction of Free Trade Agreements would help provide the institutional arrangements for India’s exports diversification.

On the issue of merchandise imports, the Economic Survey states that India witnessed revival in domestic demand resulting in strong import growth. Merchandise imports grew at the rate of 68.9% in April-December, 2021 over the corresponding period of last year and 21.9% over April-December 2019, crossing the pre-pandemic level. The Survey indicates that there has been increased diversification of India’s import sources as reflected in the reduction of China’s share to 15.5% from 17.7% in the April–November period. The Survey indicates that merchandise trade deficit has increased to US$ 142.4 billion in April-December 2021.

India has maintained its impressive performance in world services trade in the post-COVID-19 period, with services exports growing by 18.4% to US$ 177.7 billion during April-December 2021 for corresponding period of last year. The Survey says that the strong growth witnessed in services exports may also be attributed to key reforms undertaken by the Government. Services imports rose by 21.5% to US$ 103.3 billion in April-December 2021.

The Economic Survey says that India’s current account balance turned into deficit of 0.2 percent of GDP in the first half of 2021-22, largely led by deficit in trade account. Net capital flows were higher at US$ 65.6 billion in H1: 2021-22, on account of continued inflow of foreign investment, revival in net external commercial borrowings (ECBs), higher banking capital and additional special drawing rights (SDR) allocation. India’s external debt rose to US$ 593.1 billion as at end September 2021, from US$ 556.8 billion a year earlier, reflecting additional SDR allocation by IMF, coupled with higher commercial borrowings.

The Economic Survey mentions that the robust capital flows were sufficient to finance the modest current account deficit, resulting in an overall balance of payments (BoP) surplus of US$ 63.1 billion in H1 of 2021-22, that led to an augmented foreign exchange reserves crossing the milestone of US$ 600 billion and touched US$ 633.6 billion as of December 31, 2021. As of end November 2021, India was the fourth largest forex reserves holder in the world after China, Japan, and Switzerland. 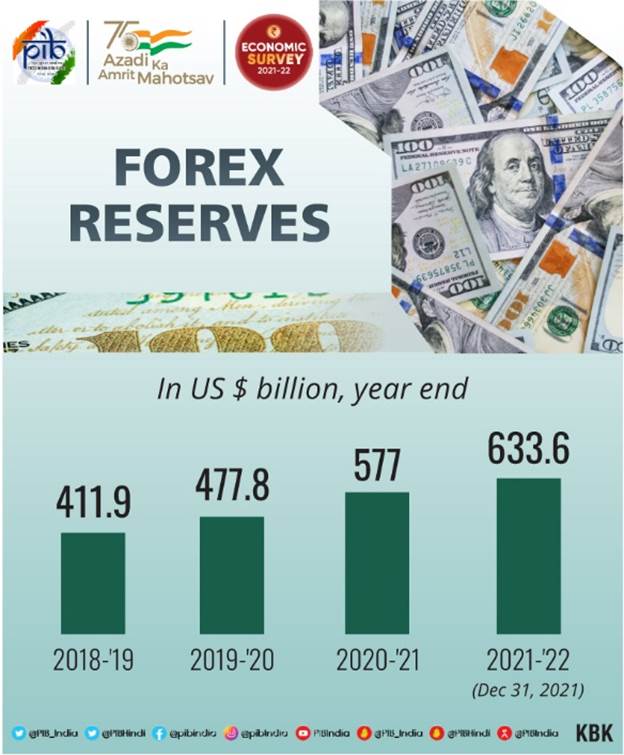 On the issue of movement in exchange rate, the Economic Survey states that the rupee exhibited movements in both directions against the US$ during April-December 2021, yet it depreciated by 3.4% in December 2021 over March 2021.  However the depreciation of rupee was modest as compared to its emerging market peers and it also appreciated against Euro, Japanese Yen and Pounds Sterling.

The Economic Survey mentions that a sizeable accretion in reserves led to an improvement in external vulnerability indicators such as foreign reserves to total external debt, short-term debt to foreign exchange reserves, etc. India’s external sector is resilient to face any unwinding of the global liquidity arising out of the likelihood of faster normalization of monetary policy by systematically important central banks, including the Fed, in response to elevated inflationary pressures.