This initiative will offer a nine-month Online PG Diploma Course in Cyber Law, Crime Investigation & Digital Forensics to about 1000 officials through NeGD’s Digital Learning Management System (LMS) in collaboration with NLIU Bhopal under the “Digital India Programme”.The goal of this Programme is to enable Police Officers, State Cyber Cells, Law Enforcement Agencies, Prosecutors and Judicial Officers to acquire the requisite skills to deal with Cyber Forensics cases efficiently & effectively as per the Indian Cyber Law while adopting global best practices, standards and guidelines. A Cyber Forensics Lab is being established in the premises of National Law University (NLU) Delhi for facilitating this course.Other law schools/ universities like National Law School of India University (Bangalore), Rajiv Gandhi National University of Law (Patiala) etc., will also be involved in the Programme in future.

Shri Abhishek Singh, IAS, P&CEO, NeGD, and CEO, MyGov India gave the background on evolution of the Programme since its inception. He elaborated that the programme was heterogeneous with participation from Judges, Officers from Police and the Customs, Judicial and Prosecution officers. Shri Singh added that the Programme featured over 100 hours of content developed by key stakeholders. A total of 542 participants has been received for which the breakup details are as follows. 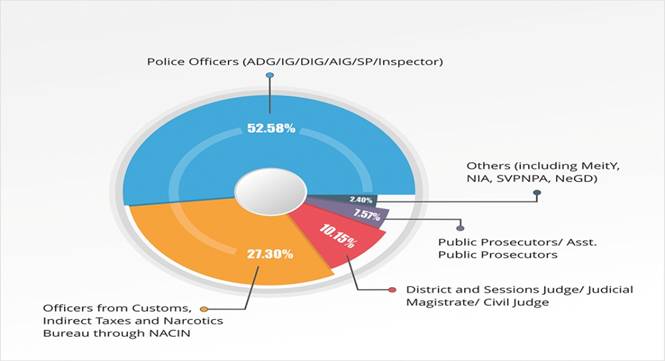 Shri M S Rao-Chief Secretary and State Vigilance Commissioner-Govt of Meghalayacomplimented MeitY, NeGD, NLIU, Bhopal, National Judicial Academy and said that this course will be extremely useful to the Law Enforcement Agencies. He added that in the times of the pandemic, there had been an increase of nearly 60% in Cyber cases between 2018 and 2019. He elaborated that one of the positive fallouts of COVID-19 was increase in use of Digital Technology; he said that this however, had led to a rise in the number of cybercrime cases and highlighted the following challenges:

Shri Rao said that location and identification of Cybercriminals was an issue along with delayed response from Service Providers; lack of timely information hampers investigation; location of data in servers outside the country etc. He added that knowledge, technology and tools were much needed to cope with increased sophistication in cybercrime. In his concluding remarks, Shri Rao added that in addition to use of Technologies and Capacity Building, creating general awareness among citizens were critical drivers for this Programme.

Dr.Vijaykumar-Vice-Chancellor-NLIU-Bhopal said that business dynamics and technology challenges played a major role in handling Cybercrime Cases which has been the major driver in designing the course in collaboration with Experts and Academia along with NeGD.

Hon’ble Justice Raghuram-Director, National Judicial Academy said that Investigational expertise along with well-trained prosecutors and requirement of Higher technical education and cpntinuouscapacibity building of Judges was much needed to handle Cybercrimes. Dr Gulshan Rai- Ex-National Cyber Security Co-ordinator-PMO emphasized that  the course has been designed to maintain the balance of Technology and the importance of practical scenarios.

Secretary- Ministry of Law – Anoop Kumar Mendritta emphasized the increased participation of Prosecution and Judicial officers and need to move towards Data Investigation from Data Governance to increase the Disposal Rate. He said that 22% of cases are disposed of due to lack of evidence with high pendency and low conviction rate which requires increased participation. He pointed out that there was a complete mismatch between Investigation and Judicial officers which will be addressed by creating a pool of Digital forensic Experts and increased Academic collaboration.

Secretary-MeitY-Shri Ajay Sawhneyinaugurated the Programme and said that this Dream Curriculum is a first of its kind designed after consultation with many experts in collaboration with Academia and a state-of-the-art Forensic lab playing a role in imparting skillsets to all officers and this was just the beginning of Skill and Capacity Building in Cybercrime in future.

NeGD has developed a Learning Management System (LMS) under its Capacity Building Scheme, which caters to the needs and requirements of learning and development of government departments envisaged in the National Programme for Civil Services Capacity Building (‘NPCSCB’) – “Mission Karmayogi.”