‘Nisargopchar Mahotsav’ has been observed on Tuesday (March 23, 2021) at Urulikanchan’s  Nisargopchar Ashram in association with the Pune-based National Institute of Naturopathy, to commemorate 151st  birth anniversary of Mahatma Gandhi.  The Mahotsav also aimed at promoting and emphasizing on self-reliance through self-health reliance with the vision of “Atmanirbhar Bharat”. 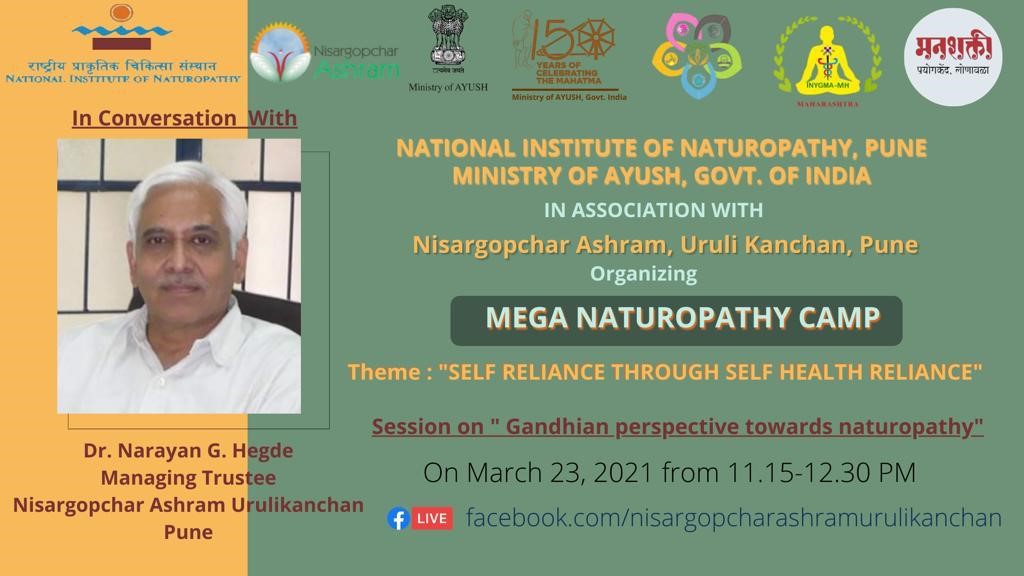 On this occasion, a webinar was organized where Dr Kushan Shah, Principal Naturopathy Physician in Nisargopchar Ashram, who spoke about ‘Role of Naturopathy and Vitality’.  Dr NG Hegde, Managing Trustee of the Ashram spoke on Gandhian perspective towards health and hygiene. Dr Sanjiv Patil, Actor and motivational speaker from Manashakti Kendra in Lonavala, spoke about ‘Stress Management’.

A session was also conducted by Dr Vandita Bagul, Naturopath, to raise awareness on healthy diet.  Dr. Samruddhi Vyas took a session on ‘Chair Yoga’ as work from home is the new normal during this pandemic.
A documentary on Gandhiji s life and message was showcased along with exhibits that throws light on Gandhiji’s faith in Naturopathy. Mahatma Gandhi was a staunch follower of naturopathy and advocated it to be practiced by all for any kind of illness. Notably, he had played a big role in instituting National Institute of Naturopathy and many such institutes across India. This initiative is a part of ongoing series of Naturopathy-melas across the country as a part of “Sustainable health campaign”. Unfortunately, the awareness about naturopathy and its utility is less known to general public, stated the organizers. With rising burden of cancers, diabetes, obesity, hypertension and other non-communicable diseases, it is the need of the hour to take the right knowledge about lifestyle and how to accommodate a healthy module in our daily routine. Such webinars aim at sharing knowledge to make people responsible for their own health.