Under the aegis of Hon’ble Union Minister Tourism, Culture and Development of North Eastern Region (DoNER) Shri G. Kishan Reddy and with round the clock support from Hon’ble MoS Shri B. L. Verma, DoNER is committed to serve the North Eastern Region of the country addressed by Hon’ble Prime Minister Shri Narendra Modiji as ‘Ashta Lakshmi’ the eight forms of the goddess of wealth.

During their small tenure till date, both the Ministers held several rounds of talk with their counterparts from key Central Ministries viz., Home, Finance, Railway, Civil Aviation, Education, Agriculture, Telecommunications, Jalshakti, Health, NHAI, etc. to speed up the ongoing projects and to further discuss new projects/schemes so as to give an overall development and to generate employment opportunities for the people of NER. Rounds of discussion were also held with Hon’ble CMs of the NER States to coordinate with the projects being implemented in the States. These efforts are not only conveying a positive face of Centre towards the NER but also bringing fruitful results, some of which are highlighted below:

As a result, there is a considerable transformation in the working of the Ministry and its organizations, which clearly reflects in their achievements as highlighted below:

MDONER in collaboration with NITI Aayog releases North Eastern Region District SDG Index and Dashboard 2021-22: With technical support from UNDP, first of its kind in the country as it focuses on the North Eastern Region. The index measures the performance of the District of the eight NE States. This is the first time, a District wise index is being prepared in the country. This SDG Index will be used as a base for planning of development and welfare activities, education, health care. Chairman stresses upon the need to generate livelihood which will not only help in increasing the family income but will also raise the living standards. 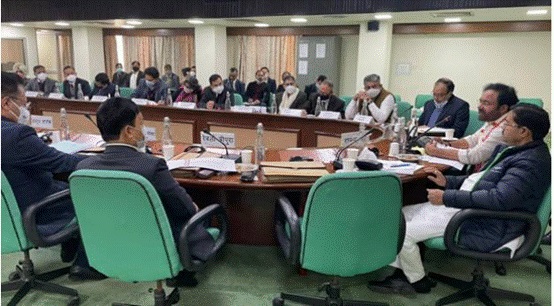 Committee Meeting under the chairmanship of Hon’ble Minister, DoNER to review and discuss Livelihood schemes being implemented by DoNER. Hon’ble MoS Shri B. L. Verma and Members of the Committee, Shri Abdul Khaleque, Ramprit Mandal, C. Lalrosanga and Rebati Tripura were present. Government of India is fully committed to raise the living standard of the people of NER besides strengthening of infrastructure and connectivity in the region as well as other measures for its holistic development through the collective efforts of all the Union Ministries/Departments. 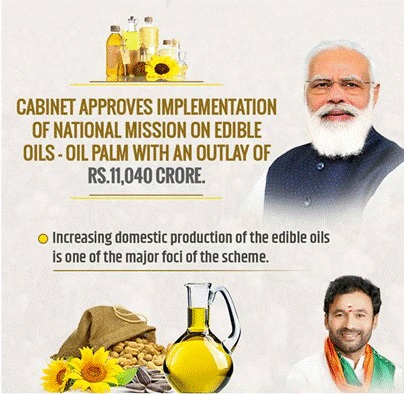 Oil Palm Mission: The National Mission on Edible Oils – Oil Palm (NMEO-OP) as a new centrally sponsored scheme with a special focus on NE Region and A&N islands. MoU for the Bamboo FPO Agreement on Edible Oils – Oil Palm for NE States has been signed. The aim of the Mission on edible oils is to increase the cultivation of oil palm from 3.5 lakh Ha. to 10 lakh Ha. across India in the next five years. 50% of the new cultivation is targeted for NE Region. Out of the estimated cost of the scheme of Rs. 11,040 crores, about Rs. 6,000 crores will directly benefit the farmers of NE States. With the objective to develop the petty artisans of the NE Region by providing financial assistance NEDFi has introduced Atmanirbhar Hastshilpkar Scheme. 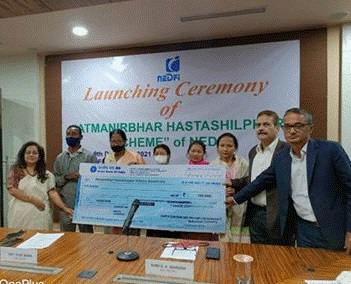 Monitoring and Geo-Tagging of projects in NE Region: Initial stage of development of project monitoring mechanism alongwith its Geo tagging in NE region being funded by DoNER/NEC. This is first of its kind in the whole Country where there is an Institutionalized involvement of ISRO in mapping and sharing of data for development projects. Destination North East and Azadi ka Amrit Mahotsav (AKAM): Regular preparatory meetings are taking place at the highest level for the celebrations of the AKAM and DNE, which is scheduled from 15.0.1.2022 to 22.01.2022 spread over NER states with some events in the Capital. Awareness programs in the form of Quiz contest and videography and photogrtaphy context have already been started through MyGov platform and are attracting interest from general public.

Digitization of MDoNER: 100% implementation of upgraded e-Office version 7.0. Training to make staff well versed with the new version has also been provided through VC. 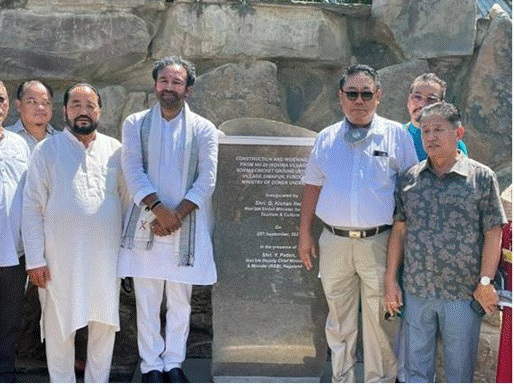 Protection of Culture and Tradition of North East: The Government of India has set up North East Zone Cultural Centre (NEZCC) at Dimapur an eastern Zonal cultural (EZCC) at Kolkata (Autonomous organization under Ministry of Culture) to protect and promote the rich and diverse traditions and culture of NE Region.

Focused Development of Backward Blocks and villages in North Eastern Region: 40 backward blocks identified in 20 districts across the 8 NE states have been identified for launching a special time-bound programme for focused development. 40 villages have also been identified to start a pilot project for providing services uniformly to the villagers for their decent living.

North East Road Sector Development Scheme (NERSDS): During 2021, a total number of 7 projects costing Rs.371.50 crore were sanctioned. However no project was completed during the 2021.

30% Component: The Union Cabinet held in January 2020 approved earmarking of 30 percent of North Eastern Council’s (NEC’s) allocation for new projects under the existing “Schemes of NEC” for focused development of deprived areas; deprived/neglected sections of society and emerging priority sectors in the North Eastern States. Accordingly, during 2021, 21 projects costing Rs.57.33 crore were sanctioned under Schemes of NEC.

Some of the initiatives of NEC are highlighted as under:

North Eastern States Roads Investment Programme (NESRIP): The scheme envisaged construction/upgradation of a total of approximately 433.225 km long roads in 6 North Eastern States of Assam, Manipur, Meghalaya, Mizoram, Sikkim and Tripura in two tranches i.e. Tranche-I and Tranche-II. During the year 2021-22 a total of Rs. 224.25 crore has been released so far.

Externally Aided Projects (EAP): Externally Aided Project is an important window for getting funds and technical expertise from various external agencies for development of sectors like infrastructure, health, livelihood, etc which are essential for NER. During the year 2021-22 a total of 27 projects amounting to Rs. 37690.16 crore have been supported by the Ministry of Development of North Eastern Region for NER region.

IT Initiatives: Information and Communications Technology has been strengthened in the Ministry to assist planning, execution and monitoring of various development schemes in the NE Region. In addition, ICT has been utilised to monitor the various major projects implemented in NER region by various other Ministries. Also supports have been provided to various organizations viz. NEC, NEDFi, NERAMAC, NEHHDC etc viz. major achievements so far are as under:

Social Media Initiatives: Major achievement of Ministry and its organizations are being covered on daily basis by way of creatives, news items and stories through Social Media Account of DoNER on daily basis. As a result, there is considerable increase in the reach of the programs/schemes of Ministry.