Several hundred miles off the Pacific Northwest coast, a small tectonic plate called the Juan de Fuca is slowly sliding under the North American continent. This subduction has created a collision zone with the potential to generate huge earthquakes and accompanying tsunamis.

In fact, this region represents the single greatest geophysical hazard to the continental United States; quakes centered here could register as hundreds of times more damaging than even a big temblor on the San Andreas Fault. 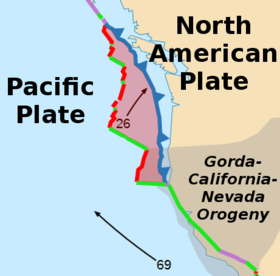 Not surprisingly, scientists are interested in understanding as much as they can about the Juan de Fuca Plate.

This microplate is “born” just 300 miles off the coast, at a long range of underwater volcanoes that produce new crust from melt generated deep below. Part of the global mid-ocean ridge system that encircles the planet, these regions generate 70 percent of Earth’s tectonic plates. However, because the chains of volcanoes lie more than a mile beneath the sea surface, scientists know surprisingly little about them. 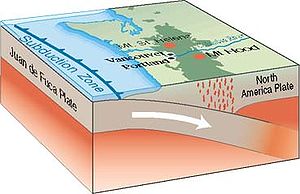 The narrow strip underneath the mid-ocean ridge, where hot rock wells up to generate the Juan de Fuca Plate, has very high attenuation. In fact, its levels are as high as scientists have seen anywhere on the planet.

Seismic waves begin at an earthquake and radiate away from it. As they disperse, they lose energy. Some of that loss is simply due to spreading out, but another parameter also affects energy loss. Called the quality factor, it essentially describes how squishy Earth is.