The  Prime Minister, Shri Narendra Modi will address the nation on the 400th Parkash Purab of Sri Guru Tegh Bahadur Ji at the  historic Red Fort on 21 April 2022. Prime Minister will release a commemorative coin and postage stamp on the auspicious occasion. Four hundred ragis will perform in the Shabad Kirtan on the occasion. The Union Minister for Culture, Shri G.Kishan Reddy announced this at a press conference today in New Delhi. Minister of State for Culture Shri Arjun Ram Meghwal and Secretary, Culture , Shri Govind Mohan were also present at the media briefing.

Addressing the media, Shri G.K Reddy said that Guru Tegh Bahadur stood up to the atrocities of the Mughals by protecting the freedom of  Dharmic faiths. He fought for the rights of Sikhs and Hindus, especially Kashmiri Pandits,  to practice their faiths by opposing forcible conversions

He further added “This event, that is being organized, will see participation from Honorable Prime Minister Shri Narendra Modi on 21st April who will release a stamp and a commemorative coin and Hon’ble Minister for Home Affairs and Cooperation, Sri Amit Shah ji on 20th April”

Union Minister also said “I have personally invited Chief Ministers of various states and prominent Sikh leaders including those from Harmandir Sahib in Amritsar, Patna Saheb and other leaders from prominent gurudwaras across the nation” 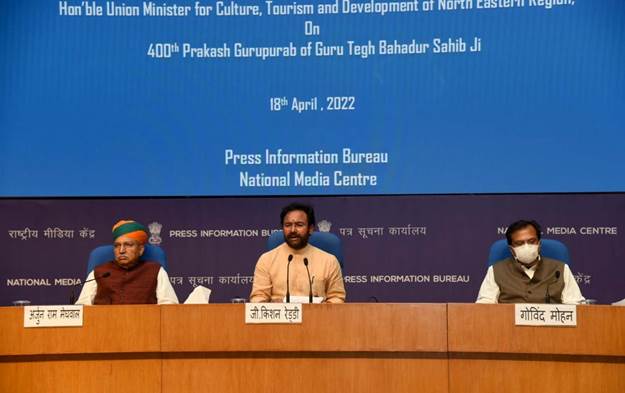 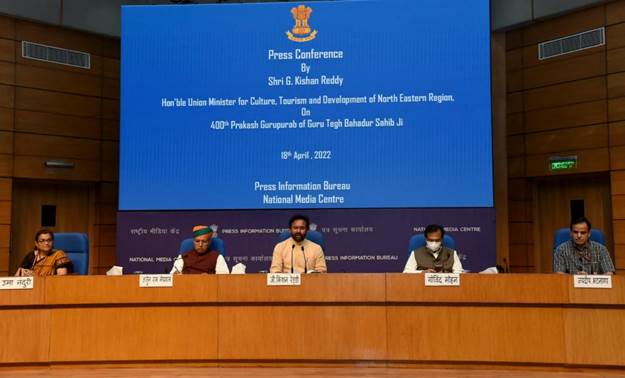 The programme shall be organized by the Ministry of Culture in collaboration with the Delhi Sikh Gurdwara Management Committee (DSGMC). Chief Ministers of different states, many prominent personalities from across the length and breadth of the subcontinent and abroad, will be part of the celebrations. This programme is being organized under Azadi ka Amrit Mahotsav (AKAM),

The Sikh faith revolves around the sacred bond of teacher and learner, Guru – the remover of darkness. For the Sikhs, the Guru refers to a succession of ten spiritual guides, the founding fathers of the Sikh faith. Sri Guru Tegh Bahadur Ji is the ninth Sikh Guru. He was popularly known as ‘Hind di Chaddar’, Jagat Guru. He was born in Amritsar and breathed his last in Delhi. He was the youngest son of Sri Guru Hargobind Ji. His mother was Mata Nanaki Ji. His wife was Mata Gujri Ji. He was the grandson of Sri Guru Arjan Dev Ji and his son was Gobind Rai who later became Sri Guru Gobind Singh Ji.

From the time of his youth, Sri Guru Tegh Bahadur Ji had a deeply meditative nature where his wife was also an active participant. Like the first five Sikh Gurus, Sri Guru Tegh Bahadur Ji had mystical experiences of the Shabad and shared his experiences through the medium of songs. Like Sri Guru Nanak Ji, he travelled far and wide – establishing new communities and nurturing existing communities that had not been visited by any of the Sikh Gurus since the time of Sri Guru Nanak Ji.

Sri Guru Tegh Bahadur Ji was the grandson of first Sikh Martyr, Sri Guru Arjan Dev Ji. Sri Guru Tegh Bahadur ji was executed for supporting the religious freedom of Kashmiri Pandits on the orders of Aurangzeb. His death anniversary is commemorated as Shaheedi Divas every year on 24 November. The latter was beheaded in Chandni Chowk, Delhi. Gurdwara Sis Ganj Sahib and Gurdwara Rakab Ganj in Delhi are associated with his sacred sacrifice. His legacy serves as a great unifying force for the nation.

On the first day of the celebration on  20th April 2022, Home Minister Shri Amit Shah will take part in the commemorative event.  Around 400 children will participate in the Shabad Kirtan on 20th April 2022. He will also inaugurate the Multimedia show ‘The Life and Sacrifice of Sri Guru Tegh Bahadur Ji’ at the Red Fort.