The Secretary Department of Food and Public Distribution under Ministry of Consumer Affairs, Food and Public Distribution,  Shri Sudhanshu Pandey  held a meeting with the Chief Secretary, Government of Karnataka wherein the settlement of procurement incidental claims, preparations of the state for procurement operations, setting up of units for production of fortified rice kernels, distribution of fortified rice, encouraging production of millets, setting up of ethanol blending units etc. were discussed. 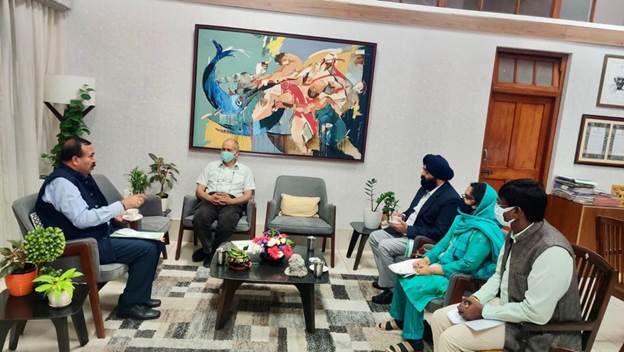 Shri Pandey further informed that 2023 being declared as International year of Millets and Karnataka being large producer of Ragi, the state should gear up with increased production of millets and tie up with the Indian Institute of Millets in Hyderabad for increased market penetration of millet products through start-ups. The Secretary Food further informed that the requirement of millets of other states can also be met by Karnataka with centre bearing all the handling and transportation costs.

He informed that the centre has already approved procurement of local verities of paddy in Udupi and Dakshin Kannada for self-consumption by the state. On the request of Chief Secretary for release of advance subsidy, it was informed that the state should send their provisional expenditure before commencement of procurement operations based on which advances can be released.

With Karnataka being one of the largest producer of sugar, Secretary Food suggested that the ethanol production and blending has to be encouraged as Karnataka is one of the eight identified states planned for introduction of 100 ethanol bunks in metros.

The Chief Secretary has suggested to have one unified software for procurement operations to which the secretary had informed that the same is under consideration.

The secretary had informed that one nation one ration for migrant labours, coffee plantation workers and other settlement workers engaged in construction activities can be actively taken up by the state for real benefit of the poor.