Shri Ashwini Vaishnaw, Union Minister of Railways, Communications, Electronics and Information Technology, Government of India inspected the production of the indigenous Vande Bharat trains at Integral Coach Factory, Chennai. During his visit, the Minister interacted with the employees and motivated them for their work. 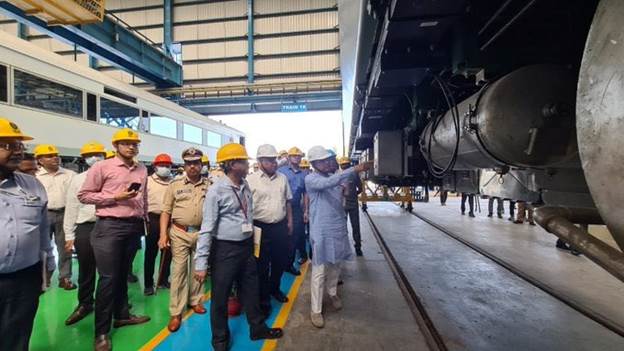 As an excellent example of the ‘Make in India’ success story, the Indian Railways launched India’s first indigenous Semi High Speed train, Vande Bharat Express, The first Vande Bharat Express train was flagged off on 15 February, 2019 on the New Delhi Kanpur-Allahabad-Varanasi route.” Speed, Safety and Service are the hallmarks of this train. Integral Coach Factory (ICF). Chennai, a Railways Production unit, has been the force behind a completely in-house design and manufacture, computer modelling and working with a large number of suppliers for system integration in just 18 months.

During his visit to Chennai, Shri Ashwini Vaishnaw flagged off 12000th LHB coach of ICF, Chennai. LHB coaches are anti-telescopic, safer, lighter, and more comfortable and jerk free. Replacement of ICF conventional coaches phase wise with LHB coaches is being done from safety point of view.

Shri Ashwini Vaishnaw also visited the Egmore Railway Station in Chennai during the night hours of 19th May 2022. He inspected the facilities at the station and reviewed the Master plan of the Chennai Egmore Station redevelopment project. The Minister discussed in detail about the proposed redevelopment plans for Chennai Egmore and facilitation of inter-modal connectivity with CMRL. While interacting with media persons, the Minister stated. “Prime Minister has the vision of transforming Indian Railways as he believes that transformation of Indian Railway will pave way transformation of Indian Economy Redevelopment of various categories of stations are part of that vision. He further elaborated about Chennai Egmore redevelopment, “Chennai Egmore will be redeveloped duly maintaining the heritage and simultaneously revamping its amenities at par with world class standards. On redevelopment, the station will become the hub of economic activity.”

During his visit, Railway Minister Shri Vaishnaw applauded the efforts of “Avishkar Hyperloop”, a passionate student led team at IIT Madras, committed to changing the future of mobility in India by developing scalable Hyperloop technologies. Hyperloop is a new innovative mode of transport which disrupts the paradigm of conventional transport where speed and comfort are carbon-heavy. It is a transportation solution for a sustainable, fast and connected future with a minimal carbon footprint. Concept is based on levitating pods travelling at near sonic speeds in vacuum tubes built between cities. A maglev in vacuum tube.

Indian Railways has joined hands with IIT Madras to indigenously develop Hyperloop technology based transportation system which runs faster than bullet trains, and has considerably low operating cost. Indian Railways will extend financial support of Rs. 8.34 cr to IIT Madras for this project.