The Union Minister of Ayush and Ports Shipping & Waterways Shri Sarbananda Sonowal announced a slew of measures to boost the AYUSH sector in Mizoram. The Minister, along with the Chief Minister of Mizoram, Zoramthanga, laid the foundation stones for six Ayush hospitals in Mizoram. In a further boost to healthcare infrastructure in the hill state of the Northeast, as many as 24 Ayush Health & Wellness Centres (HWC) were inaugurated across Mizoram at the event held here today. 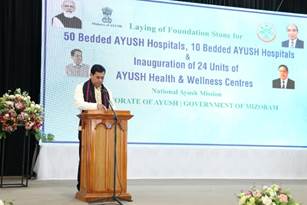 The Union Minister underlined the importance of unlocking value from the rich traditional medicinal practice of India, including the folk medicines of Mizoram and the Northeast. Speaking about the role of Ayush can play in patient care management, Shri Sonowal further said that the rich heritage of traditional medicines as envisaged by Ayush is scientifically proven to be effective in patient care. The holistic approach to patient care & healthy lifestyle includes both preventive as well as curative aspects. He said that the in order to learn & leverage the folk medicine, the AYUSH ministry is conducting a multi centric research project to critically appraise and validate Local Health Traditions (LHT), Oral health Traditions (OHT) and Ethno Medicinal Practices (EMP) among ethnic communities of the Northeast.”

Speaking about the role of Mizoram & Northeast in India’s new age of economic growth, the Union Minister said, “Through ACT East Policy, the PM has envisaged the Northeast to be the most important region of India that will power the New Engine of growth. The Asta Lakshmi of Northeast can be realised fully when Mizoram – along with all other Northeastern states – become Atma Nirbhar by enhancing our wisdom, work in cooperation & partnership, develop our abilities to compete at the global level.”