Home National Sikkim and Arunachal Pradesh all geared up to launch 1250 and 1330...

TRIFED of M/o Tribal Affairs conducted an outreach session with the state teams and VDVKs of the two North-Eastern States of Sikkim and Arunachal Pradesh recently. This session was one in the series of State Level webinars conducted to review the progress of the implementation of the Van Dhan initiative . Sikkim and Arunachal Pradesh are the latest entrant states from the North-East. Attendees from the two States (SIAs, SNAs, VDVKCs) are all keyed up and geared to launch 1250 and 1330 VDVKs which will be subsumed into 80 VDVK Clusters in Sikkim and 85 VDVK Clusters in Arunachal Pradesh.

The webinar was started with an address by Shri Pravir Krishna MD, TRIFED who reiterated the need and importance of implementation of MSP For MFP Scheme, Van DhanYojana and other convergence projects which aid in employment and income generation for the tribal people, while keeping in mind and implementing complete safety measures during these times of the pandemic.

This was followed by a quick progress update on the status of implementation of the MSP for MFP Scheme and Van DhanYojana by the representatives of the two states.In Arunachal Pradesh, 85 VDVKCs have been identified and actions are being put in place so that they will be sanctioned at the earliest.

For Sikkim, an amount of Rs 1200 Lakh has already been sanctioned for the Van DhanYojana. Efforts have also begun in earnest to operationalize all the 80 VDVKCs at the earliest. As a part of the immediate next steps towards this goal, it has been decided that the State agencies from both the states will start preparation of the plans for MSP procurement and infrastructure development. The five-step plan for each VDVKC will also be formulated. Step 1 involves the identification of items for Procurement of MFPS in each VDVKC and strengthening it with a planned development of infrastructure including Procurement Sheds and godowns. Step 2 entails the appointment of Local NGOs or NRLM Officials as Mentors for each Cluster as per guidelines issued and Release of money to each Cluster by Transferring Rs 10 lacs to each cluster account.Step 3 will require the preparation of   Business Plans for each cluster for taking up Value addition and other formalities including opening of bank account and setting up of signages and Boards for identification of each VDVK Cluster and VDVK. Step 4envisges the Planning and facilitating of each Cluster into Production, Branding, Packaging and Sale of its selected products as per the Business Plan. And in Step 5, ESDP, SFURTI and TRIFOOD schemes will be converged with respective clusters gradually to expand the scope of programme.

The rest of the webinar was focused on the clarification of any related queries from either the State teams or the representatives of the Van DhanVikas Kendras or clusters. The webinar was also attended by UNICEF representatives to guide the VDVK members regarding safe practices during COVID. This will provide sustainable livelihoods to more Tribal Families based on Grants for each of the above activities as a viability gap funding for aspirational and far flung areas of the state to promote growth based on local asset base and skill sets of the people residing there. 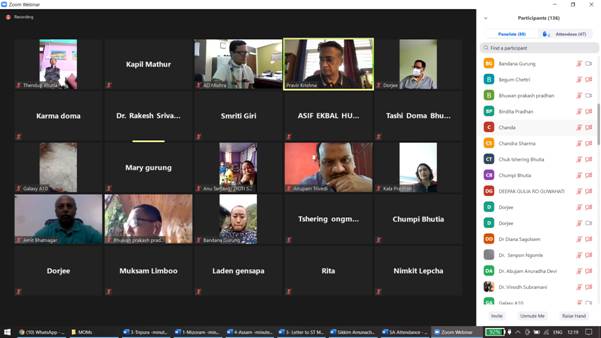 A series of more Webinars with Top Officials of the remaining partner states across the country have been planned for the next two weeks, up until May 28, 2021.

The Mechanism for Marketing of Minor Forest Produce (MFP) and its component, Van Dhan tribal start-ups is an initiative implemented by TRIFED, Ministry of Tribal Affairs towards income and livelihood generation of the tribal population. A flagship scheme of the Ministry of Tribal Affairs,drawing its strength from The Forest Rights Act of 2005, the MSP For MFP Scheme aims to provide remunerative and fair prices to tribal gatherers of forest produces, almost three times higher than would be available to them from middle men, trebling their incomes.

Together, both the schemes offer a great opportunity to the tribals to improve their income and employment. To continue with the progress made in the implementation and take it to the next level, the convergence of the Van DhanYojana with the MSP for MFP has been planned. A way of doing that is through the convergence of the Van DhanYojana to the Enterprise Model: from processing to cluster development under SFURTI (Scheme of Fund for Regeneration of Traditional Industries) and TRIFOOD.

The webinars being held in this month are an opportunity to the State implementing agencies and the other stakeholders to connect, review and correct course of action so that maximum benefit that can be derived by the efficient implementation of these schemes accrue to the tribal population.

With the successful implementation of these planned initiatives, TRIFED is working towards the transformation of the tribal ecosystem and usher in an Amul-like revolution among the tribals across the country.