Addressing the meeting, the Union Home Minister said that as per the guidelines of the Prime Minister Shri Narendra Modi, the Department of Border Management, Ministry of Home Affairs has been working over the last few years in the direction of further strengthening of coastal security and more can be done with suggestions received from all.

Shri Amit Shah said that the Ministry of Home Affairs is seriously assessing the challenges being faced in coastal security. He said that in view of the suggestions given in the meeting, appropriate and adequate steps would be taken to make coastal security impenetrable along with the states.Shri Shah said that for the first time all the islands of the country have been surveyed and many important decisions are being taken on the basis of reports received in this regard.He said that many ministries and agencies have a role in coastal security and by establishing mutual coordination amongst them, coastal security will be further strengthened after a meeting with stakeholders very soon under the chairmanship of Prime Minister, Shri Narendra Modi. 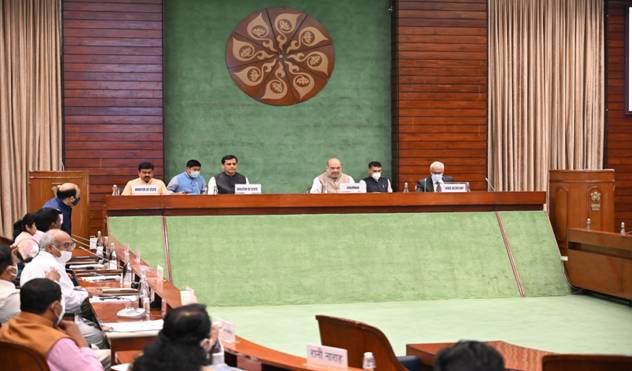 Several important topics were discussed at the meeting and suggestions were also made to strengthen coastal security at par with land border security. Members present in the meeting also suggested the formation of separate Coastal Police Cadre in all the states and monitoring of islands and coastal areas with the help of technology. Apart from this, proper allocation of budget for allround development of coastal areas and effective operation of Coastal Police Stations was emphasized. For this, the need for proper training of policemen and training of fishermen from the point of view of safety was also emphasized. Using technology to prevent collisions between ships and fishing boats at sea was also discussed. Members also stressed on increasing maritime trade and the Blue economy along with coastal security.

During the meeting, a detailed presentation was made by the Department of Border Management, Ministry of Home Affairs on the steps taken to further strengthen coastal security, in which the completion of Phase-I and Phase-II of the Coastal Security Plan and commencement of Phase-III were discussed.