Union Home Minister Shri Amit Shah attended the consecration ceremony of Mahamrityunjayatemple inNaugaon, Assam today. Shri Amit Shah said that it was a privilege to participate in the consecration ceremony of the world’s tallest 126 feet high Shivling in the Mahamrityunjaya temple. Today the vow of Shri Bhrigugiri Ji Maharaj has been fulfilled. The Union Home Minister said that he prayed to Mahadev for the good health and prosperity of all countrymen. Shri Amit Shah also visited Boroduapilgrimage, the birthplace of MahapurushShrimantShankardev. 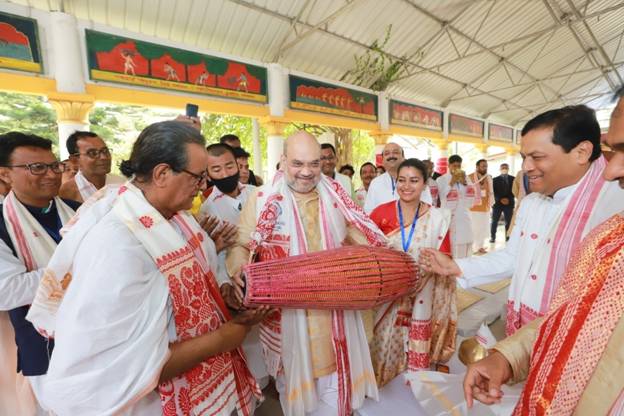 Addressing a public rally in Borodua, Shri Shah said that it was a great privilege for him to come to this holy place. ShrimantShankardev started the new Vaishnav tradition from this holy land and made the Vaishnavite tradition vibrant. It was from here that Shri Shankardev started to give a new devotional culture to Assam and Shri Madhavdev took it forward. Shri Amit Shah said that he has come here to seek blessings from both deities so that the ideas and Bhakti movement of ShrimantShankardev can be carried forward not only in Assam but all over India. Besides starting the Bhakti Movement, ShrimantShankardevinitiated several steps for the unity of India. Quoting from the verses of ShrimantShankardev, “You do virtue during a lot of lives and then there is a sum of all great virtues, only such souls get a chance to be born in this holy land of India”. This verse reveals Shri Shankardev’s attachment to India. Shri Amit Shah also said that Mahatma Gandhi had said during the Freedom Movement that “Assam is very fortunate that Shankardevwas born here 500 years ago, who gave the people of Assam a model that revived the concept of Ram Rajya.”

The Union Home Minister said that he is very happy that under the leadership of Assam Chief Minister Shri SarbanandaSonowal, the state Finance Minister Shri HimantaBiswaSarma has made a provision of Rs. 180 crore in this Budget for the construction of a memorial forShrimantShankardev here. Shri Shah said that previous governments did not do the work of building a memorial here. The erection of a memorial here will help carry forward for ages the message of ShrimantShankardev. Shri Amit Shah said that the Government of Assam has done a commendable job by giving Rupees 2.50 lakheach,to more than 8,000 nominees,who are older than 50 years, and I want to increase this number from 8,000 to 25,000 in the coming times. This will serve to advance the views of ShrimantShankardev.Shri Amit Shah said that many important works are going to be carried out at the site of construction of the memorial of ShrimantShankardev. There will be guest houses, art centers, sports complexes, auditoriums, residences for travellers, healthcare centers, toy trains for children as well as musical fountains, idols and statues beautifying the skyline. Shri Shah also said that a very large communications center is also coming up. 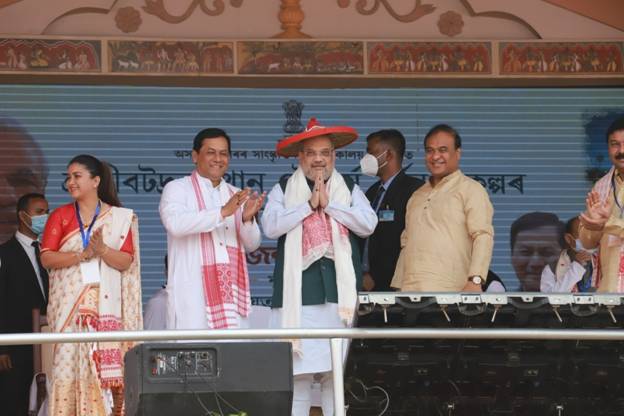 The Union Home Minister said that under the leadership of Prime Minister Shri Narendra Modi, the Government of India has started new development in the entire North-East. The North-East, which was earlier known for different types of insurgencies, is now on the path of development. Shri Amit Shah said that Shri Modi has done many remarkable workto redeem pride of the North-East. The Narendra Modi government has done the work of honouring Assam by bestowing the Bharat Ratnaon Dr. Bhupen Hazarika. Shri Shah said that the Prime Minister Shri Narendra Modi strived to establish peace within Assam which has paved the way for enriching the dignity, culture, language, literature and music of Assam. Shri Shah said that the Modi Government, besides taking Assam on the path of development, has also worked to make the state free of corruption and agitations. Referring to the Bodoland Agreement signed by the Modi Government, Shri Amit Shah said that on23rd February, more than 1,000 people from  five militant organizations laid down their arms before the Assam government, earlier also over 600  people from nine organizations, youth of these extremist organizations have joined the mainstream, I want to assure them that you have as much right over this country as I do. There cannot be development without peace; if what every person wants is a job, health, education, home and electricity, taking up arms is not the solution. The Union Home Minister said I want to assure all of you that the Prime Minister Shri Narendra Modi is continuously working for the inclusive development of Assam, you do not need to take up arms. Shri Shah said that the Prime Minister Shri Narendra Modi has visited the North-East 35 times within 5 years and worked to speed up the development of the region. 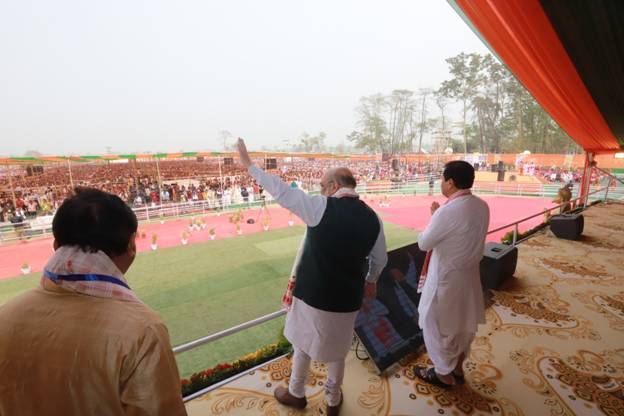 The Union Home Minister said that in the last 5 years, more than 20,000 kms. of roads have been constructed in Assam and work is going on for the construction of a refinery. Six bridges were built on the Brahmaputra river, Rs 46,000 crore was given for the development of the oil field, a new airport is being built in Guwahati and a few days ago, the Prime Minister, Shri Narendra Modi, has given land lease to 1 lakh people. 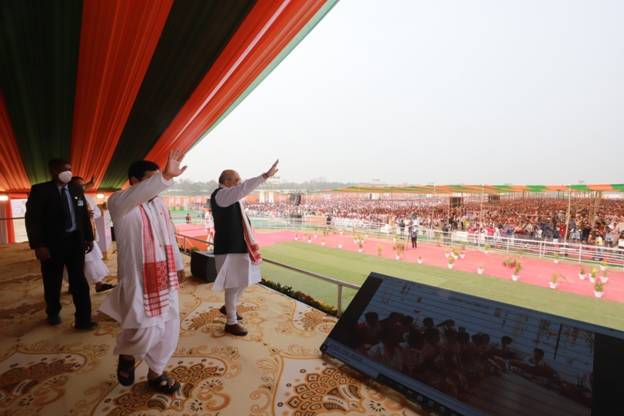 Shri Shah said that the work that was not done in 70 years has been done in the last seven years. The Government of India has a plan of Rs. 2,000 crore for the tea garden workers of ​​Assam. There is concern about their housing, health and education. A new medical college was opened in Guwahati, Tata group built a cancer hospital at a cost of Rs 860 crore and several medical hospitalswere opened. Shri Amit Shah said that along with Ayushman Bharat, Atal AmritAbhiyan was also implemented here and a lot of work has been done for the farmers. Shri Shah said that the Modi government has made a special provision in the budget of Rs. 53,000 crore for Assam. He said that we have to develop Assam to the extent that the youth here do not have to go anywhere else in the country in search of jobs.