Union Home Minister Shri Amit Shah today paid tributes at Jagdalpur to the brave security personnel who were martyred in Chhattisgarh while fighting the Naxalites. Saluting the martyred security personnel, Shri Amit Shah said that the country will never forget your valour and sacrifice. The whole country stands with the bereaved families. The Union Home Minister also said that we are committed to take this fight against unrest to its conclusion. 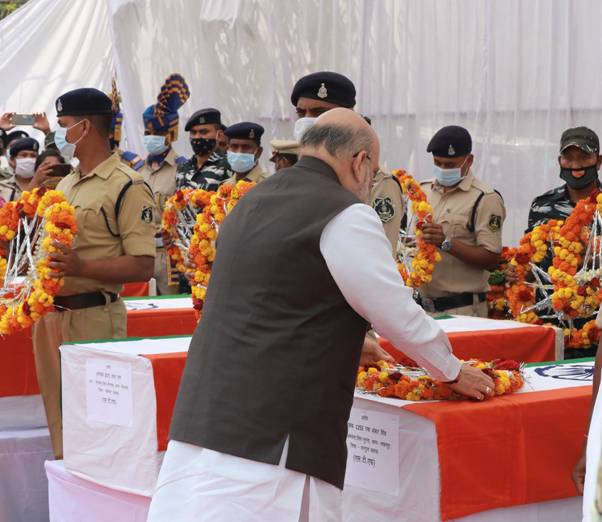 The Union Home Minister chaired a high-level meeting with Chhattisgarh Chief Minister Shri Bhupesh Baghel and senior officers in Jagdalpur to review the Left Wing Extremism (LWE) situation in the wake of the Naxal attack on security personnel on 3rd April. Addressing the media after the meeting, Shri Amit Shah said that on behalf of the Prime Minister Shri Narendra Modi, Government of India and the entire nation, I pay tributes to the soldiers who have been martyred in the Chhattisgarh Police, CRPF and Cobra Battalion. Shri Shah said that this supreme sacrifice of the brave security personnel will not go in vain and the country will always remember their supreme sacrifice to bring this fight to a decisive turn. Shri Amit Shah said that it is the priority of the Modi Government to take this fight against Naxalites to its logical end. In the last few years, the fight against the Naxalites has reached a decisive turn and this unfortunate incident has further enhanced our resolve. The Union Home Minister said that in a review meeting with the Chief Minister of Chhattisgarh, Shri Bhupesh Baghel and all the Force officers, it has been suggested that the pace of the fight against the Naxalites should not be slowed down in any way, which shows that the morale of our soldiers is still intact. 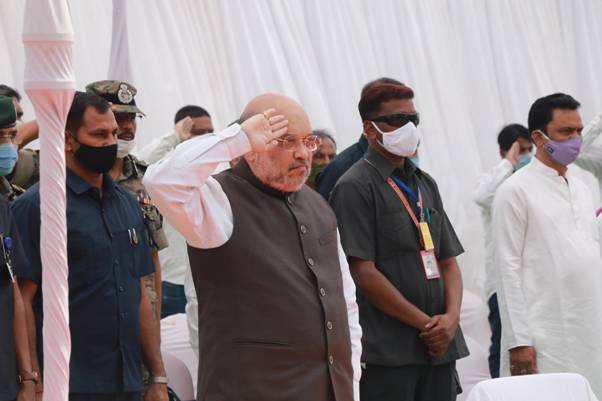 The Union Home Minister said that he wants to assure the country that this fight will not stop but will move ahead with more pace. We will take it to the end and at the end of this fight our victory against the Naxalites is certain. Shri Amit Shah also said that in the last 5 to 6 years, we have achieved success to a large extent in setting up security camps deep inside the Naxal affected areas of Chhattisgarh. The Government of Chhattisgarh and the Government of India have stepped up the march further deep and rattled by this inroads, such incidents happen. Shri Amit Shah said that a lot of work has been done on the development front too; due to COVID-19, the pace has slowed down in the last one year but action is being taken based on all suggestions received from the tribal people’s representatives, Chief Minister of Chhattisgarh and other MPs. The Union Home Minister also said that the Central and State Governments, on the one hand, are collaborating to intensify development work inside the tribal areas and, on the other hand, fighting vigorously against armed groups. 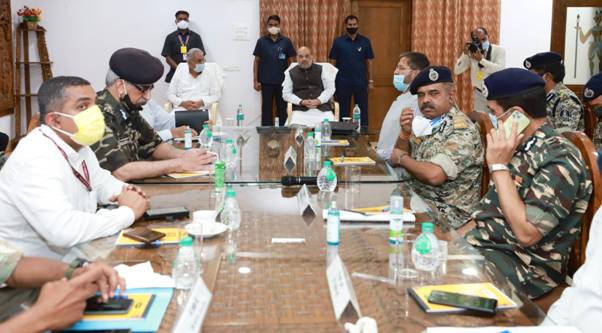 Shri Amit Shah told the families of the martyred soldiers that the supreme sacrifice that your family member has made for the country can never be forgotten. The entire nation stands with you in this sad hour of crisis. The Union Home Minister said that we will definitely achieve the goal with which your family member has made the supreme sacrifice.