Under the new (Pilgrimage Rejuvenation and Spiritual, Heritage Augmentation Drive) “PRASHAD” scheme introduced by Prime Minister Narendra Modi, around Rs. 52 Crore has been proposed for infrastructural and other different kinds of development in the holy city of Katra, Vaishno Devi. 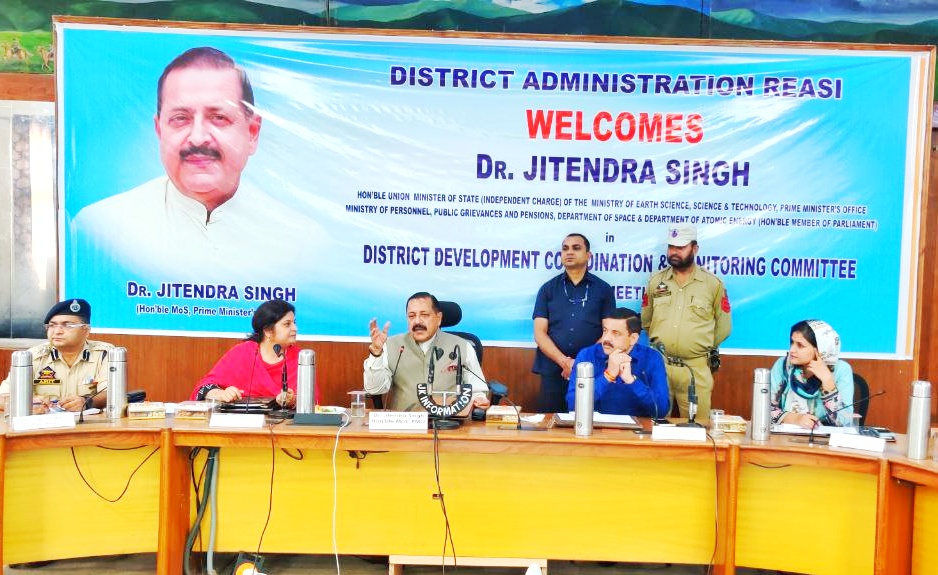 The Minister said, it is a matter of pride for all residents of district Reasi that the world’s highest bridge which was sanctioned six years ago after lots of follow up with the Railway Ministry and faced issues related to alignment in the early phase, is finally now almost complete and it has been acclaimed all over the world. It will also serve as a vital railway link to connect Kashmir valley with the rest of India. About the ongoing Katra-New Delhi Express Corridor, Dr Jitendra Singh said, this project which received sanction four years back is now moving on fast track and also includes six laning of existing national highway from Pathankot to Jammu.

The Union Minister took comprehensive review of The Union Minister stressed that Power, Health, Education, Agriculture and PHE are the main priority sectors of the Government and he asked the officers to work hard to reach out to the people with zeal, sincerity and dedication. He also emphasised on putting special focus on sectors like Agriculture, Horticulture so that it could generate more employment in the district. The Union Minister said that Government of India has initiated several programmes and Schemes for all-round development of the district particularly far-flung areas of the district. He stressed upon the officers to work with sincerity and dedication.

Thereafter, the action taken on the directions issued on the issues raised by PRI members in the last DISHA Meeting was informed by DC through Power Point.

During the meeting, all PRI members appreciated and lauded the efforts of the district administration in improving the pace of all development works and their efforts to achieve within the stipulated timelines. They put forth their fresh issues and demands before the Chairman DISHA like inclusion of left out beneficiaries under PMAY, Providing road connectivity under NABARD, naming of highest railway bridge at Kouri, Shortage of staff in Govt schools, Release pending payment of PMAY(G) -II instalment, KV Reasi, Installation of solar lights, Construction work at Katra Bus stand, non-functioning of CCTV Cameras at Katra , De-congestion of Bus stand Reasi, Shifting of Veterinary Hospital, Filling of EO post, Ban on mining

During the meeting it was conveyed that Katra kas been brought under Rs 51.60 crores PRASHAD scheme comprising of various components like multipurpose tourist facilitation centre, Development and up gradation of Nehru park, Development of fountain chowk, Statue of Sridhar Bhagat, Amphi Theatre, Re-development of road from Asia to foundation Chowk, Re- Development of road from foundation chowk to Banganga, TRC building façe lift and allied works, Banganga gate near fountain chowk, Tourist guest house, Water point and Signages etc which is under active consideration my Ministry of Tourism, Government of India.

The Union Minister assured that the issues and demands raised by all the PRI members will be taken up on priority basis.