The major highlights of the Department of Sports during the year 2021 are as follows:

• India won total 7 Medals in Olympics, 2020 which is the highest medal tally from India in any Olympic including 1 Gold, 2 Silver and 4 Bronze.

• Neeraj Chopra won Gold, which is the first ever medal in athletics discipline and he is the second Indian to win individual Gold in any Olympics.

• A record number of 54 para Athletes participated in 9 different sports disciplines. India won 19 medals Tokyo Paralympics. Till Tokyo, India had won a total of only 12 medals in all previous Paralympics.

• This is also the highest ranking (24th) India has achieved in Paralympic Medal Table. Previous best was 25th, which came way back in 1972.

National Sports Awards: National Sports Awards are given every year to recognize and reward the excellence in sports. This year, Shri Ram Nath Kovind, President of India, presented the Awards to 72 outstanding Athletes/Coaches in a function held at Rashtrapati Bhavan on November 13, 2021. 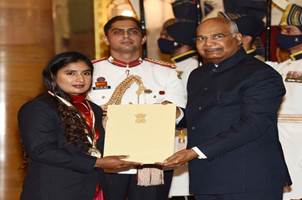 A Function, chaired by Minister of MYAS Shri Anurag Thakur, was held in New Delhi on 1st November, 2021, to meet and honour the winners of National Sports Awards, 2020.It may be mentioned that the winners of these awards had already received the cash awards during the last year’s event, which was held virtually owing to the Covid-19 Pandemic, but they were not able to collect the trophy and citation, which they collected during this ceremony.

Sports Authority of India (SAl) Institutional Awards: The Minister of Youth Affairs & Sports Shri Anurag Thakur conferred the first ever Sports Authority of India (SAl) Institutional Awards to 246 athletes and coaches at a ceremony held on 17th November, 2021, at Jawaharlal Nehru Stadium, New Delhi. These awards were given for exceptional performance under the various sports promotion schemes at the national and international level for the years of 2016-17, 2017-18, 2018-19 and 2019-20. • Fit India Mobile App was launched on 29th August. It is available for download on both Android and iOS platforms

Support to Meritorious Sportspersons: On 22.07.2021, the Department of Sports launched a novel initiative to support such candidates who are meritorious sports persons and have represented India at Asian, Commonwealth or Olympics, to pursue the Executive Post Graduate Diploma in Sports Management (EPGDSM) Programme conducted by IIM Rohtak. Such support by the Department will continue for 5 years from the date of commencement of EPGDSM course i.e., from September, 2021 to September, 2026, and financial assistance upto Rs. 5 lakh per candidate will be provided.

WADA Restores accreditation of NDTL: The National Dope Testing Laboratory (NDTL)  regained the World Anti-Doping Agency (WADA) accreditation. NDTL  and as informed by WADA ,  its accreditation has been restored. With this, NDTL’s Anti-Doping testing and activities will be resumed with immediate effect. In its continuous efforts to excel, NDTL has been collaborating with the National Institute of Pharmaceutical Education and Research (NIPER) Guwahati and the CSIR-IIIM Jammu for research in Anti-Doping Science. NDTL has also been collaborating with other WADA accredited laboratories for strengthening its research activities and anti-doping efforts.

Union Sports Minister launched on 28.01.2021 a breakthrough Reference Material for use in chemical testing in the field of anti-doping synthesized by collaborative efforts of National Dope Testing Laboratory (NDTL) and National Institute of Pharmaceutical Education and Research (NIPER), Guwahati. This Reference Material (RM), has been identified by NDTL as one of the rarely available RMs globally and would be used to strengthen anti-doping measures in all World Anti-Doping Agency (WADA)-accredited laboratories.

#Cheer4lndia campaign: To cheer the Indian athletes participating in Tokyo Olympics a social media group was created under this Campaign, with all participating athletes, Coaches and Support Staffs as its members, to generate a feeling of oneness among the athletes during the games which are held under extra-ordinary circumstances.

Launch of theme Song and #Cheer4lndia campaign for Indian Olympic Team-2020: Official theme song of the Indian Olympic Team of Tokyo 2020 Olympic Games was launched in New Delhi on 24th June, 2021. A nation-wide #Cheer4lndia campaign through various activities like quizzes, selfie points, debates and discussions on Olympics was also launched. The activities were initiated in line with the advice of the Hon’ble Prime Minister that the entire nation must come together to support and motivate Indian athletes going to Tokyo Olympics.

Central Athlete Injury Management System (CAlMS): Central Athlete Injury Management System (CAlMS), a first-of-its-kind initiative by the Ministry of Youth Affairs and Sports was launched on 11th June, 2021 for streamlining the sports medicine and rehabilitation support offered to the athletes. The core committee of CAlMS includes eminent top of the line experts. CAlMS is expected to revolutionize the way athlete injuries are managed and treated. It will have the following four structures: Athlete Wellness Cell, On Field Sports Medicine Experts, National Resource Referral Teams and a Central Core Team.

143 Khelo India Centres across 7 States in India: Department of Sports launched another set of 143 Khelo India Centres across 7 States with a total budget estimate of Rs.114.30crore on25.05.2021. These centres will be entrusted with one sports discipline each. The States include Maharashtra, Mizoram, Goa, Karnataka, Madhya Pradesh, Arunachal Pradesh and Manipur.

Medical and accident insurance to athletes, coaches and support staff: In the wake of the Covid-19 pandemic, it was announced on 20.05.2021 that Sports Authority of India (SAl) will extend medical and accident insurance cover to more than 13,000 athletes, coaches and support staff from this year. Under this, the insurance cover of Rs.5 lakh each will be provided to all national campers, probable national campers, Khelo India athletes and junior campers training at SAl Centre of Excellence. While the health insurance would be for Rs.5 lakh each, it also includes a Rs. 25 lakh cover for accident or death.

Support to ex-international athletes and coaches amid ongoing Covid-19: In a bid to ensure that ex-international athletes and coaches have access to medical, financial and logistical support during Covid-19, Department of Sports (DoS), Indian Olympic Association (IOA) and Sports Authority of India (SM) had joined hands on 9 1May, 2021 to create a special support cell. Funds will be released from the Pandit Deendayal Upadhyaya National Welfare Fund for Sportspersons (PDUNWFS), wherein financial assistance will also be given to sportspersons and their families who are living in dire condition.

Fit India Mission in association with Federation of Indian Chambers of Commerce & Industry (FICCI) organized a virtual conference on 10th March 2021 on ‘Fit Women, Fit Family, Fit India’ as part of the convergence of Fit India Mission’s Programme with ‘BetiBachaoBetiPadhao’ and to celebrate the International Women’s Day celebrations.

Yogasana sport for both male and female categories was included in Khelo India Youth Games, 2021. The Government recognized the National Yogasana Sports Federation (NYSY) as a National Sports Federation for promotion and development of Yogasana as a competitive sport in the country. The Government recognition makes NYSF eligible for financial assistance for conduct of national championships in all the categories, viz. Senior, Junior and Sub-junior and participation in international sporting events.

Second Edition of Khelo India Winter Games: The second edition of Khelo India Winter Games was inaugurated virtually by Prime Minister on 26th February, 2021. The sports meet successfully concluded on March 2, 2021 in Gulmarg, Jammu & Kashmir. The annual event was organized by the J&K Sports Council and the Winter Games Association of J&K with the Ministry of Youth Affairs & Sports. On this occasion, Union Sports Minister announced various plans to further enhance the sports ecosystem in J&K including creating a state-of-the-art winter sports academy.

Honour Sporting Heroes: In an effort to honour sporting heroes of the country, the Department of Sports has taken a decision on 17.01.2021 to name all upcoming and upgraded sporting facilities of the Sports Authority of India (SAl), after renowned athletes, who have contributed to sports in India.

State Bank of India made a contribution of Rs 5 crores to National Sports Development Fund (NSDF) on 18.01.2021, with the primary aim of meeting the needs and requirements of elite athletes supported under the Target Olympic Podium Scheme (TOPS).

Union Sports Minister inaugurated a 162 bedded air conditioned residential hostel in the premises of the Dr. Karni Singh Shooting Range on 07.01.2021. This facility has been created at a cost of Rs 12.26 crore. With the creation of this hostel facility, it will be a major boost for the Indian shooters training at the facility who have previously been staying at accommodation outside the shooting range.

Union Sports Minister launched the Assam Rifles Public School (ARPS) in Shillong as a Khelo India Sports School on 04.01.2021. At present, 9 Sports Schools have been approved across the country with a view to integrate sports with education and in the process, develop sports in the country and improve the overall profile and outlook of athletes.