Home National Declaration of Results of Ranking of States: 2019, on support to Startup... 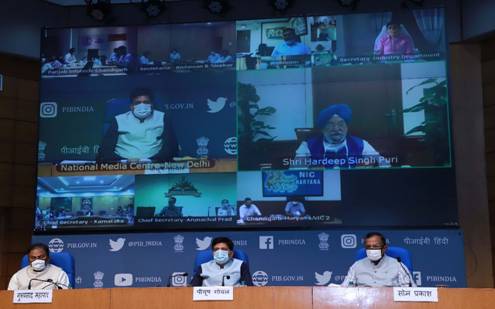 The Department for Promotion of Industry and Internal Trade (DPIIT) conducted the second edition of the States’ Startup Ranking Exercise, with the key objective to foster competitiveness and propel States and Union Territories to work proactively towards uplifting the startup ecosystem.  It has been implemented as a capacity development exercise to encourage mutual learning among all states and to provide support in policy formulation and implementation.

The States’ Startup Ranking Framework 2019 has 7 broad reform area, consisting of 30 action points ranging from Institutional Support, Easing Compliances, Relaxation in Public Procurement norms, Incubation support, Seed Funding Support, Venture Funding Support, and Awareness & Outreach. To establish uniformity and ensure standardization in the ranking process, States and UTs have been divided into two groups.While UTs except Delhi and all States in North East India except Assam are placed in Category ‘Y’. All other States and UT of Delhi are in Category ‘X’.

A total of 22 States and 3 Union Territories participated in the exercise. Evaluation Committees comprising independent experts carried out a detailed assessment of responses across various parameters. Many parameters involved getting feedback from beneficiaries which was gathered through more than 60,000 calls made in 11 different languages to empathetically connect with beneficiaries to ascertain the real situation at the implementation levels.

For the purposes of Ranking, States are classified into 5 Categories: Best Performers, Top Performers, Leaders, Aspiring Leaders and Emerging Startup Ecosystems. Within each category, entities are placed alphabetically. States are also recognised as Leaders in 7 reform areas of support to startups. Results are attached at Annexure.

The felicitation ceremony was accompanied by the release of a National Report which highlights the vision, trajectory, methodology and the future roadmap of the States Ranking Exercise. A State Specific Report for each of the 25 participating entities has also been released, containing a comprehensive analysis of respective ecosystem, which highlights strengths and priority areas for future.

A ‘Compendium of Good Practices’ adopted by various States in supporting startups has also been released. It identifies 166 good practices, which may be directly used by States to identify and implement newer initiatives.

The National Report and Specific Reports for all participating States and Union Territories launched during the session can be downloaded from the Startup India Portal.

Speaking on the occasion, Shri Piyush Goyal said that Startups have Out-of-the-box thinking, and are solution oriented, who look at new and new ideas. He said that the Prime Minister has been fully appreciative and supportive of promoting entrepreneurs who are important from the point of job creation, expanding economic activity and for the prosperity of people.

The Minister said that centre and states, coming together in the spirit of cooperation, collaboration and competition to promote startups, is really an important development. Describing the startups as the store-house of talent, knowledge and ideas, Shri Goyal said that the ranking will not help the states and UTs, but also the entrepreneurs, and will help in expansion of the startups and launching of new ventures. He also highlighted the fact that women entrepreneurs are actively into the startups, and this breaking of stereo-typing is an encouraging sign.

Shri Goyal expressed happiness on the fact that like the centre’s fund of funds for startups, states are also working on the similar lines. He called upon the High networth individuals, venture capitalists and other funds to also come forward for financing the startup ventures. The Minister recommended that startups should come up with imaginative, relevant and innovative products, undertake reengineering and reform of processes, and orient their ideas to be people-centric. He said that Covid pandemic should not be seen as a problem or challenge but as an opportunity to reimagine and reinvigorate India. During COVID period, our Startups have come up with brilliant ideas & solutions to the many problems that the country & the world face.

Shri H.S.Puri said that societies that have developed across the globe, have developed ecosystems for encouraging entrepreneurships, and collaborative solution development. He said that strong ecosystem for startup is necessary for the country to reach the levels of $5tn economy by 2024. He expressed happiness that the mindset of our people is changing from the job seekers to job providers.

Shri Som Parkash said that the ranking will encourage our young entrepreneurs who have skills and ideas to start their businesses. He said that the country has become 3rd largest ecosystem in the world.

Secretary, DPIIT Dr Guruprasad Mahapatra said that the startup ecosystem in the country has led to creation of over 4 lakh jobs. He said that the ranking is an example of cooperative federalism, which will help in capacity building in the states.

Link of the event https://www.youtube.com/watch?v=pKGMTItOTXU&feature=youtu.be

Link of the report

This group has all States and UTs except those in Category ‘Y’.

This group has all North-Eastern States except Assam and all UTs except Delhi.

The top scoring States across each reform area have been recognised as a leader.