Dr. Harsh Vardhan, Union Minister of Health and Family Welfare today interacted with Sh. Nitinbhai Patel, Deputy Chief Minister and Minister for Health and Medical Education, Gujarat in the presence of district collectors of all the districts and senior health officials of the State and the Union. Reminding everyone that the country is currently in the tenth month of the pandemic, Dr. Harsh Vardhan said, “Active cases are currently around 7,72,000 which has been less than 10 lakhs for close to a month. 55,722 cases were reported in the last 24 hours while 66,399 cases were discharged from care. Doubling time has been diluted to 86.3 days and the country will soon cross the figure of 10 crore cumulative tests.”

On the management of COVID in Gujarat, he noted, “From being one of the top affected states earlier, the state has shown remarkable stride to have a recovery rate of 90.57% comparable to the recovery rate of India (88.26%).” He congratulated the State for conducting 77,785 tests per million against the country’s figure of 68,901. “Gujarat’s active case burden now stands at a mere 14,414, out of which 99.4% are stable. Rest 0.6% comprising of 86 people are presently on ventilator,” he added.

Reiterating his statement that the coming winter and the long festive season pose a significant risk that could threaten the gains made against COVID-19, he said, “We should all be vigilant for the next three months. Prime Minister’s message of wearing a mask/face cover, maintaining a physical distance and frequent handwashing should reach the last citizen. Steps should be taken to monitor their non-compliance. Following COVID appropriate behaviour is simple.”

Dr. Harsh Vardhan interacted with the district collectors of Ahmedabad, Gandhinagar, Rajkot, Vadodara and Surat which were the most affected districts and are vulnerable due to their urban nature. He also took stock of the preventive steps taken in the districts of Junagadh and Jamnagar which have been reporting a surge in positivity in the last few weeks. 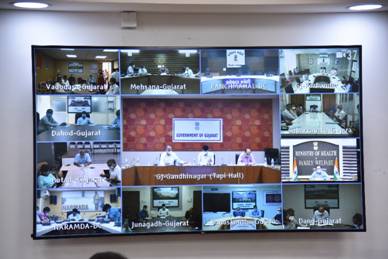 Speaking on the state of preparedness for the upcoming season, that also sees a surge in the number of weddings and tourism besides the festivities, Sh. Nitinbhai Patel said, “SoPs have been issued for carrying out various activities safely. People visiting Ahmedabad through buses are tested outside the city limits and are referred to isolation centres, if found positive.”

In line with government’s commitment to save lives as well as livelihood, Sh. Patel stated that power utilization by the industries are reaching pre-COVID levels and the State has seen a surge in GST collections as well.

Dr. Sujeet Singh, Director, National Centre for Disease Control (NCDC) apprised everybody present on the trajectory of COVID in the State and alerted them to remain vigilant about influenza which usually peaks in the winter months.