The Hubble Space Telescope has captured the image of the first-ever predicted supernova explosion.

This unique event offers opportunity for astronomers to test how mass – especially that of mysterious dark matter – is distributed within a galaxy cluster. 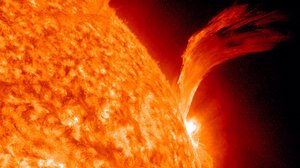 Many stars end their lives with a bang, but only a few of these stellar explosions have been caught in the act. When they are, spotting them successfully has been down to pure luck – until now.

On December 11, astronomers not only imaged a supernova in action, but saw it when and where they had predicted it would be.

The supernova, nicknamed Refsdal, has been spotted in the galaxy cluster MACS J1149.5+2223.

While the light from the cluster has taken about five billion years to reach us, the supernova itself exploded much earlier, nearly 10 billion years ago.

These multiple images of the galaxy presented a rare opportunity. As the matter in the cluster – both dark and visible – is distributed unevenly, the light creating each of these images takes a different path with a different length.

Therefore, the images of the host galaxy of the supernova are visible at different times. Astronomers are now eager to see what other surprises the ongoing Hubble Frontier Fields programme will bring to light.

The Hubble Space Telescope (HST) is a space telescope that was launched into low Earth orbit in 1990, and remains in operation. With a 2.4-meter (7.9 ft) mirror, Hubble’s four main instruments observe in the near ultraviolet, visible, and near infrared spectra. The telescope is named after the astronomer Edwin Hubble.

Hubble’s orbit outside the distortion of Earth’s atmosphere allows it to take extremely high-resolution images with negligible background light. Hubble has recorded some of the most detailed visible-light images ever, allowing a deep view into space and time.

Many Hubble observations have led to breakthroughs in astrophysics, such as accurately determining the rate of expansion of the universe.