Home National Prime Minister to Inaugurate ‘Amrut Mahotsav’ & to Flag off Padyatra from...

Shri Prahlad Singh Patel, Minister of State (Independent Charge) for Culture & Tourism has said that the Prime Minister Shri Narendra Modi will inaugurate the ‘Azadi Ka Amrut Mahotsav’ and will flag off the Padyatra from Sabarmati Ashram, Ahmedabad tomorrow. Addressing a press conference here today, he said that the Government has decided to organize a series of events to commemorate the 75th Anniversary of India’s Independence as ‘Azadi Ka Amrut Mahotsav’ beginning from 12th March, 2021 to 15th August, 2022. He informed that State Governments and Union Territories will also organize programmes on 12th March, 2021. 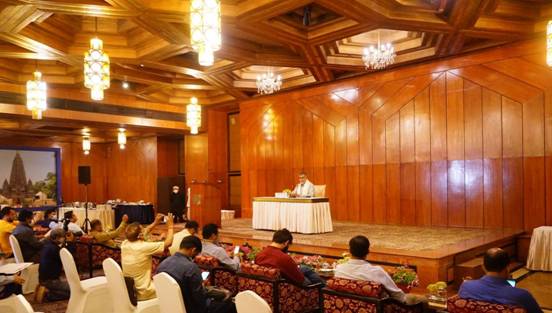 The Minister said that Mahatma Gandhi along with 81 persons had initiated the famous Dandi Padyatra from 12th March to 6th April, 1930. The Padyatra to be flagged off by the Prime Minister tomorrow will cover a journey of 241 miles from Sabarmati Ashram, Ahmedabad to Dandi in Navsari and will end on 5th April, 2021 lasting for 25 days. 81 Marchers will participate in the Padyatra and different groups of people will be joining it on the way to Dandi.

Shri Patel also announced that he will lead the first lap of 75 kilometers of the Padyatra.

The Minister said that Government has decided to commemorate the 75th anniversary of independence as Amrut Mahotsav. Weekly events will be organized during the forthcoming 75 weeks till 15th August 2022. He said that every week an event will be held. To ensure the involvement of all citizens in this Mahotsav, various programes will be organized as per their interest with Ministry of Culture being in the supporting role.

Hon’ble Union MoS (IC) Ministry of Culture and Tourism Shri @prahladspatel briefed the press about Azadi ka #AmritMahotsav and discussed the modalities relating to the celebration which start from march 12th 2021. pic.twitter.com/9wvoMEnWmy