Dr Jitendra Singh said, the Special Campaign launched on “BapuJayanti” from 2nd October to 31st October, 2022 is aimed at ensuring timely and effective disposal of Public Grievances, References from Members of Parliament, State Governments, Inter-Ministerial Consultations and Parliamentary Assurances and disposal of scrap.

Referring to Prime Minister Narendra Modi’s very first speech from the Ramparts of Red Fort on 15th August 2014, wherein he announced to launch Swachh Bharat Mission from 2nd October, 2014, Dr Jitendra Singh said, the mission became a Jan-Andolan and has been dubbed as the biggest Social Reform Movement after independence. He said, it also demonstrated the intent of the government that it will address the fundamental issues facing common-man in a mission mode.

Dr Jitendra Singh said, until now more than 67,000 Sites have been identified by Ministries/ Departments of Government of India for conducting the cleanliness campaigns. Around 21 Lakh Physical Files and 3 lakh e-Files are due for Review during the said campaign. For the first time, this year the campaign will also focus on e-Files and the review of the same.

Dr Jitendra Singh said, the Special Campaign 2.0 is expected to cover over 1.5 lakh Post Offices, overseas mission/posts, Railway Stations, and other public offices in mission mode during the month-long campaign. Training of nodal officers with respect to the portal of the Special Campaign has already been conducted by DARPG. 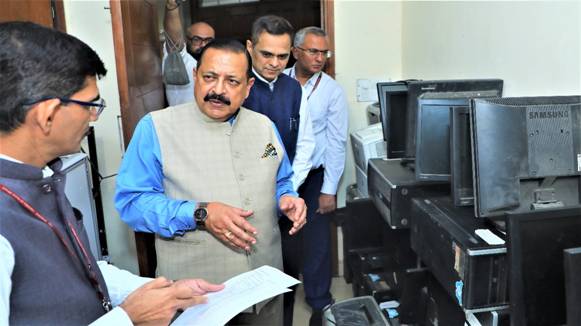 Addressing the special Swachhata event, Dr Jitendra Singh said, as per the directions of Prime Minister Modi, the scope and mandate of Special Campaign 2.0 has been expanded and it will focus more on field/outstation offices in addition to the Ministries/ Departments and their attached/subordinate offices and Autonomous Bodies of Government of India. Department of Administrative Reforms and Public Grievances (DARPG) will oversee implementation of the Special campaign 2.0.

Dr Jitendra Singh also released the Special Campaign 2.0 Guidelines Booklet and August Progress Report on the occasion, besides releasing the Circulars for Easing of Rules of Department of Pensions.

Dr Jitendra Singh recalled that during the first phase of Special Campaign launched in October, 2021, about 12 lakh sq. ft. of space was freed up in offices for productive use and Rs.62 Crore earned from disposal of scrap.

Union Secretary, DARPG, V.Srinivas said, DARPG has created Hashtag#Special Campaign 2.0 for Social Media Post. All Nodal Officers of Special Campaign were requested to use the tag in their social media posts and tag DARPG @DARPG_GOI in Twitter and @DARPGIndia in FB.