Dr Jitendra Singh said, soon after Modi took over as Chief Minister of Gujarat, his first challenge was to overcome and build afresh the devastating earthquake in Bhuj and as he completes 20 years as head of government, the latest challenge confronted by him was the COVID pandemic sweeping across the nation of 140 crore people. The Minister said, each of these challenges were handled by providing new ideas, his long hours of introspection about how to innovate new ideas and his intimate connection with the ground which enables him to convert every challenge into an opportunity.

On questions about his governance model, Dr Jitendra Singh said, ever since Modi took charge in May, 2014, his first mantra was “Maximum Governance, Minimum Government” and after nearly nine years now, it is “Whole of Government” approach through integration of schemes and ideas, rather than working in silos.

Dr Jitendra Singh said, transparency, accountability and citizen-centricity became the hallmark of Modi’s Governance Model. He said, within three months after taking charge at the Centre, one of the first major decisions was to introduce self-attestation and do away with the practice of getting documents attested by gazetted officer, thus reposing faith in youth of India, which constitutes 70% below the age of 40 years. 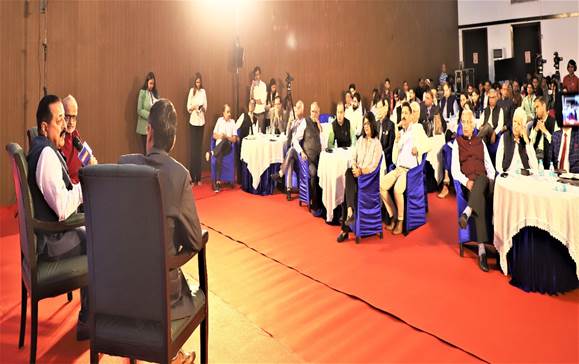 Similarly, Narendra Modi had suggested the abolition of interviews during Independence Day address from the ramparts of Red Fort on 15th August 2015 and the same was implemented by DoPT from 1st January 2016 that paved the way for level playing field for all the candidates.This government has done away with over 1500 rules which have become obsolete and were hindrance to governance. The Minister said that all the reforms are not only governance reforms but they are also huge social reforms having long-term impact on society.

Dr Jitendra Singh referred to the India’s Prevention of Corruption Act, 1988, which the Modi government amended after 30 years in 2018 to introduce a number of new provisions including criminalizing the act of giving bribe also in addition to taking bribe and at the same time putting in place an effective deterrence for such actions by individuals as well as corporate entities. He said, free and unrestricted access to information is an antidote to corruption and added that use of technology and e- governance have proved to be powerful tools specially in removing corruption in the delivery of public service.

In reply to questions, Dr Jitendra Singh said, a number of revolutionary pension reforms were introduced in the last eight years including relaxation in the provision of Family Pension for divorced daughters and Divyangs, introduction of Face Recognition Technology through mobile app for ease in submitting Life Certificate by elderly pensioners, steps like extension of Family Pension to differently abled child of a deceased Government employee/Pensioner or giving a major hike in the Family Pension emoluments for Divyang children of a deceased government servant/pensioner are not only pension reforms but these are social reforms having wide socio-economic implications.

Dr Jitendra Singh, who is also looking after the Department of Space received a volley of questions from the audience on a wide range of issues. He pointed out that Space sector in India functioned under veil of secrecy, and here again it was Modi, who unlocked the sector for private participation two years ago and results are quite obvious, as Space reforms have unleashed innovative potentials of Start-Ups and within a short span of time, from a couple of Space Start-ups three -four years back, today we have 102 start-ups working in cutting-edge areas of space debris management, nano-satellite, launch vehicle, ground systems, research etc. The Minister said, with the integration of R&D, Academia and Industry with equal stake, it is safe to say that a Space Revolution led by ISRO along with the Private Sector and Start-ups is on the horizon. 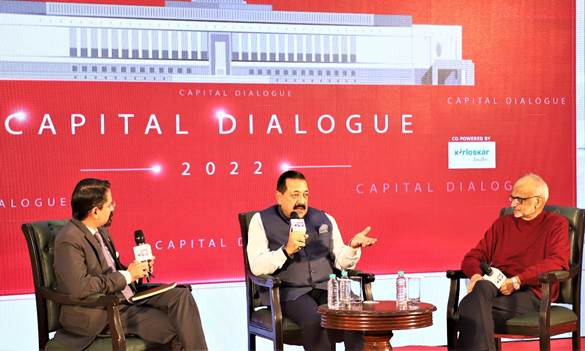 Dr Jitendra Singh said, the ambitious dream for India that Dr Vikram Sarabhai, the first Chairman of ISRO and the founding father of India’s Space Programme saw sitting in his primitive scientific set up has covered glorious path and the whole world is looking at India as an inspirational place today, as it is helping budding countries in capacity building and satellite building including nanosatellites. The Minister said, during the eight years of the Government led by Prime Minister Modi, the youth talent of India, which was waiting to be explored, got new outlets to give full play to their potential with a fiery zeal. He said, India was always having the huge talent pool and passion to dream big, but finally it was Modi who gave them a perfect outlet.