There was a time when armed groups spread terror in Manipur and in many cases the then governments were also involved, but there has been a very big improvement in the law and order situation under Shri Biren Singh

In his address on the occasion, the Union Minister of Home Affairs and Minister of Cooperation said that I have got the opportunity of Bhoomi Pujan of Rani Maa Gaidinliu Tribal Freedom Fighters Museum and through this sacred work the spirit, patriotism and efforts of our freedom fighters will be passed on to the generations to come. He paid tributes to all the freedom fighters of Manipur on the occasion. Shri Amit Shah said that many freedom fighters of Manipur fought against the British in the state and made the country proud. Shri Shah said that Maharaja Kulchandra Singh of Manipur and his companions were imprisoned for years on Mount Harriot in the Andaman and Nicobar Islands after being sentenced. He said that during the Freedom Movement, the Maharaja of Manipur, Shri Kulchandra Singh, with his courage and valour, began the fight against the British in the Northeast. We have renamed Mount Harriet as Mount Manipur in his memory to pay tribute to Maharaja Kulchandra Singh and all the freedom fighters of Manipur. The Union Home Minister said that this museum will become a center of attraction not only for Manipur but for the entire North-Eastern states because our freedom struggle is incomplete without our tribal brothers. If anyone has sacrificed in the freedom struggle, then they are the Freedom Fighters of our tribal society.

The Union Minister of Home Affairs and Minister of Cooperation said that this is the year of Azadi Ka Amrit Mahotsav and recently Prime Minister Shri Narendra Modi decided to celebrate the birth anniversary of Bhagwan Birsa Munda on 15th of November every year as Janjaatiya Gaurav Diwas, to glorify the contribution of tribal society for protecting the culture and the Independence of the country. On occasion of 75 years of Independence, we are celebrating the entire week from 15th to 22nd November as Aadivasi Gaurav Week. Remembering Rani Gaidinliu, Shri Amit Shah paid tribute to her and said that we all take inspiration from you and so will the generations to come. You were not a queen by birth and no one gave you the title of queen, but the way you took part in the freedom struggle, today the whole country respects you. When governments give titles, they are forgotten in a few years, but when people give titles, people remember them for ages. He said that many freedom fighters like Baba Tilka Manjhi, Siddho Kanu, Chand Bhairav, Telanga Khadia, Shankar Shah and Raghunath Shah of Madhya Pradesh, Seth Bhikhari, Ganpat Rai, Umrao Singh Tikait, Vishwanath Sahdev, Nilambar Pitambar, Narayan Singh, Jatra Oraon, Jadonang and Raj Mohan Devi fought the British tooth and nail on different occasions. How can one forget Bhagwan Birsa Munda on this occasion because our tribal leader, whom the whole country knows by the name of Bhagwan Birsa Munda, was the first person to raise voice for freedom in the country.

The Union Minister of Home Affairs and Minister of Cooperation said that we are celebrating this year as Amrit Mahotsav year. But, the Prime Minister’s idea behind the ​​​​Amrit Mahotsav had three objectives before the people of the country. First, this is an opportunity to remember all such freedom fighters who made the supreme sacrifice and fought for freedom, because today under the leadership of Shri Modi, where the country stands with pride in the world, their sacrifice lies at its foundation. If they had not made sacrifices at that time, then today the country would not have seen this day. In order to remind the younger generation about the many martyrs and freedom fighters of the country, known or unknown, it has been decided to celebrate the Azadi Ka Amrit Mahotsav at various places. The second goal is to inculcate the spirit of patriotism in the younger generation. We were born after Independence and this generation and the next generation will not have a chance to die for freedom, but we definitely have a chance to live for the country. Our life is engaged in the development of the country, bringing glory to the country and taking the country forward, so there is a need to celebrate Azadi Ka Amrit Mahotsav. The third vision is that Prime Minister has said that the period between 75 years to 100 years of our Independence will be our best years, the people of the nation have to make a resolve that India will take its rightful place amongst the global community on the completion of 100 years of its Independence. 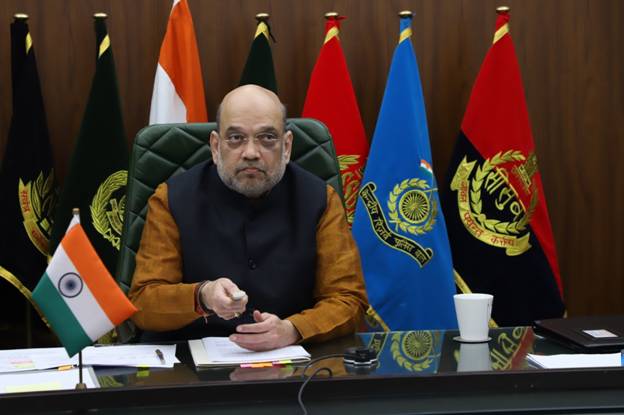 The Union Home Minister said that Rani Gaidinliu was born in a village in Manipur and joined Jadonang’s Independence movement at the age of 13 and her two-year association prepared her to become a Freedom Fighter against the British. She took over the leadership of the movement and after the martyrdom of Jadonang, a fierce freedom struggle took place under her charismatic leadership. Living in the remote hills of the Northeast, a little girl challenged the world’s largest empire. Today the country remembers her with respect. The Prime Minister also released Rs. 5 and Rs. 100 coins on the occasion of her birth centenary celebrations. She was also given the Padma Bhushan. The Indian Coast Guard has honored her by naming a patrol boat in her name on October 19, 2016. Shri Amit Shah said that setting up of museums for freedom fighter across the country will help in uniting society, as where there is no tribal population, people do not know how much struggle tribal society went through and how many sacrifices were made by them for the country’s Independence. That is why on August 15, 2016, the Prime Minister had announced that our government would build Tribal Freedom Fighters Museums in various states so that younger generations could know that our tribal brothers were ahead of us in making sacrifices. The government has allocated an amount of Rs 1.95 crore for this, out of which an amount of Rs. 110 crore has already been released. Such museums are about to come up in Gujarat, Jharkhand, Andhra Pradesh, Chhattisgarh, Kerala, Madhya Pradesh, Telangana and Manipur. The museum in Manipur is about to come up at a huge cost of Rs. 15 crore and it will once again awaken the spirit of patriotism in the tribal areas of the North-East.

The government of Prime Minister Shri Narendra Modi is committed for the development of the tribals. Be it Eklavya schools or buying forest products at MSP much tribal development work has been done by the Narendra Modi government. The Union Minister of Home Affairs and Minister of Cooperation said that in the last 5 years, under the leadership of Shri Narendra Modi and Chief Minister Shri Biren Singh, peace has returned to Manipur after a long time and today Manipur is progressing in every field. He said that the State Government has fulfilled promises made in Manipur that there will be no strikes, bandhs and blockades. At one time many armed groups were spreading terror in Manipur and in many cases the then governments were also involved with them. But under the rule of Shri Biren Singh, there has been a great improvement in the law and order situation. The development that Shri Narendra Modi and Shri Biren Singh have brought in five years will surely weigh more as compared to development of Manipur in 70 years. Many works have been done in Manipur, a sports university is being built, a new Assembly building is ready. A lot of infrastructure work has been done in Manipur and hill villages have felt for the first time that the Central and State Governments are taking care of them.

Shri Shah said that everyone wanted the votes of the electorate of Manipur, but did not worry about the development of the State and now electrification of hill villages has been done. The Narendra Modi government is bearing the cost of health expenditure up to Rs. 5 lakh for every Manipuri resident. Gas has been supplied to every house, toilets have been built, schools have been built on the hills and there have been efforts to ensure connectivity.