The “World Herbal Encyclopedia” is a unique endeavour to gather the scattered knowledge of all medicinal plants and their widespread usages at one place.

The work has been compiled and authentically arranged, based on extensive research and data collection from various electronic resources, databases, published, unpublished, hand written and rare manuscripts and books available till date.

For the first time, this book displays, in the most suitable and systematized manner the in-depth knowledge of medicinal plants which were verbally practiced among the various folkloric and traditional treatment systems of the world. 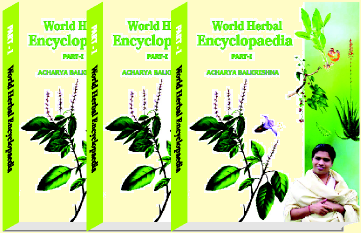 The book unfolds almost all known unknown medicinal plants of the world which were earlier unavailable in any text at one place and can be scientifically explored for various illnesses in the future. These plants have been explained elaborately from the point of view of traditional uses and their classical illustrations to modern scientific experiments.

This unique work brings forth the productive and appropriate treatment methodology for simple to severe diseases known from antiquity till date.

This Encyclopedia is the one and the only book of its own kind. This book depicts 3,00,000 (three hundred thousand) vernacular names and numerous synonymous names (nearly 2,50,000) of about 60,000 medicinal plants of the world in more than 250 languages spoken across the globe.

Besides, all the common names of the plants known in different regions of the world, and more than 15,000 Sanskrit names of 900 medicinal plants found in ancient Ayurvedic published texts and unpublished manuscripts are also compiled in it.

Most interestingly, it is the first treatise where around 60,000 medicinal plants of the world are given entirely new Sanskrit nomenclature (in binomial pattern) from family up to genus and species level, describing the base of origin of nomenclature in scientific terms.

The book also describes about the origin of names of different families and genus. Along with, the book includes external features (morphology) of the plants, experimental pharmacological studies, chemical constitutions, medicinal properties of plants, toxicological effect and various medicinal uses in different medicine systems, traditional medicines as well as in folk medicines which are popular across the world along with the modern researches in the respective areas.

Consequently, it will be easy to identify any plant as well as to know about its appearance and properties. It is a unique blend of traditional herbalism with evidence-based research and modern uses.

It contains world class authenticity in the identification of medicinal plants in regard with their recent and correct botanical names, local names, ancient Sanskrit names, etc. This is a first book on medical herbalism that describes all groups of plant kingdom including medicinal fresh water and sea plants (algae), fungi, lichens, bryophytes, pteridophytes, gymnosperms and angiosperms.

It contains approximately 25,000 live paintings (canvas paintings) and 35,000 line diagrams of medicinal plants, which is an incredible attempt as there are very few herbal works which depict paintings of plants as a key to identification. Photographs and line diagrams have been provided which presents a clear exhibition of these plants.

Hence, it is a book which extraordinarily unfurls the knowledge of medicinal plants and their uses, and contain remedies from simple to complex diseases which are traditionally well-known and practiced by the mankind in the cross verticals of the globe.

Virtually this Encyclopedia being the most descriptive and genuine works on medicinal plants of the world. The book contains a good source of information for all readers on the global ground. This work will enhance the knowledge of students, researchers and scholars from various fields who are curious to study medicinal plants and their uses.

It will be beneficial for botanists, taxonomists, scientists, doctors, traditional medicine practitioners, traditional pharmacists, herbal industries and for all the communities of the society interested in the subject.

It will be equally beneficial for pharmaceutical industry as nowadays demand for green pharmacy is increasing day by day. The book will open new grounds for modern research on the unexplored medicinal plants; as till date there is no such book which covers almost all medicinal plants available on the earth.