From Australia to Azerbaijan, Indonesia to Iraq, Saudi Arabia to South Sudan, some 250 sites around the world will be lit in ‘UN blue’ as part of the global celebrations of the 70th anniversary of the United Nations.

The celebration will kick off in New Zealand and from there a wave of blue – the official colour of the UN – will move across countries and continents as monuments around the world take part in the event to commemorate UN Day.

UN Headquarters in New York will light up for two nights, beginning 23 October when the annual UN Day concert will be held, and concluding on 24 October, which has been celebrated as UN Day since 1948.

The Day marks the anniversary of the entry into force of the UN Charter. With the ratification of this founding document by the majority of its signatories, including the five permanent members of the Security Council, the Organization officially came into being. 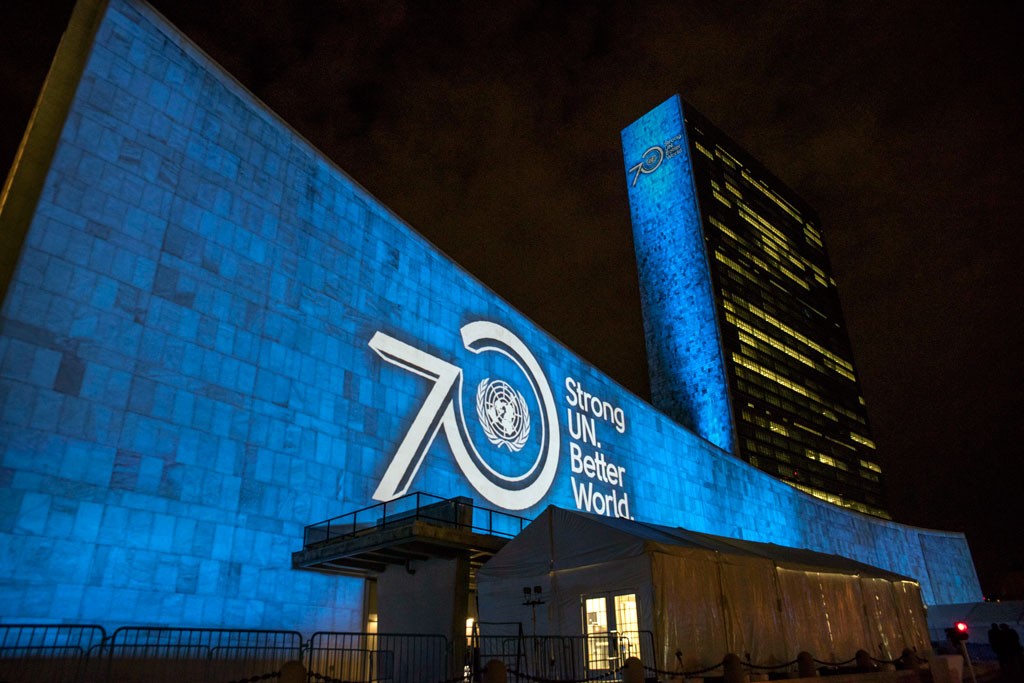 To mark this anniversary, monuments and buildings across the world are being illuminated in UN blue.

Among the famous landmarks taking part in the ‘Turn the World UN Blue’ campaign will be the:

To mark this milestone 70th anniversary for the Organization, a range of activities and events have been organized throughout the year under the theme of “Strong UN. Better World.”

Key events include a ceremony held in San Francisco in June to commemorate the anniversary of the signing of the UN Charter in that city in 1945.

Last month saw the publication of a coffee table book, “The United Nations at 70: Restoration and Renewal,” which combines a richly illustrated tribute to the recent restoration of the UN Headquarters complex in New York, designed by modernist architects Le Corbusier and Oscar Niemeyer, with reflections on the Organization in its 70th year.

In addition, a selection of iconic photos and historical documents covering key moments from 70 years of UN history – from its founding in San Francisco to its work around the world today – are captured in ‘The UN at 70: Moments and Milestones’ photo exhibition on display at UN Headquarters in New York.

Under the Charter, the Secretary-General is appointed by the General Assembly upon the recommendation of the Security Council.