Preferential Trade Agreements (PTAs) have been proliferating, especially since the establishment of the World Trade Organisation (WTO) in 1994. As of 1st December 2015, the WTO had received notifications of no less than 619 PTAs (disaggregated by goods, services, or accessions), of which 413 were already in force.

Clearly, then, PTAs are popular. Within the broad category of PTAs, one can distinguish five forms, listed below, with each subsequent arrangement being a deeper form of integration, requiring more coordination and a greater loss of autonomy.

A. Partial Scope Agreement (PSA): A PSA is only partial in scope, meaning it allows for trade between countries on a small number of goods.

B. Free Trade Agreement (FTA): A free trade agreement is a preferential arrangement in which members reduce tariffs on trade
among themselves, while maintaining their own tariff rates for trade with nonmembers.

C. Customs Union (CU): A customs union (CU) is a free-trade agreement in which members apply a common external tariff (CET) schedule to imports from non-members.

D. Common Market (CM): A common market is a customs union where movement of factors of production is relatively free amongst member countries. 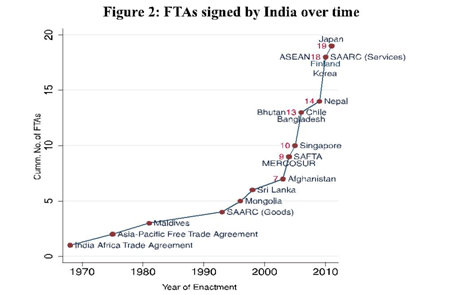 In addition to its long-standing commitment to multilateralism under WTO agreements and in line with global trends, India has made use of FTAs as a key component of its trade and foreign policy, especially from 2003-04 onwards.

There have also been two regional trade agreements, the South Asian Free Trade Agreement (SAFTA, 2004) and the India-Association of Southeast Asian Nations Agreement (ASEAN, 2010). Outside Asia, FTAs have been agreed with Chile (2006) and MERCOSUR (2004).

An earlier study on FTAs commissioned by the Ministry of Finance and authored by Rupa Chanda of the Indian Institute of Management, Bangalore notes that there are differences in the coverage of products and degree of integration across recent FTAs.

For example, the India-Korea CEPA contains chapters on Origin Procedures, Telecommunication and Audio-Visual Co-production, but these are not included in the India-Japan CEPA.

On the other hand, the India-Japan agreement has chapters on Technical Regulations, Standards and Conformity Assessment Procedures and Sanitary and Phytosanitary Measures, Government Procurement and Improvement of Business Environment but these chapters are not included in the India-Korea CEPA.

In other words, all FTAs are not the same, and these differences need to be recognized when analyzing their impact.

Recently, PTAs have begun to morph into mega-regional agreements, which would encompass a large share of world GDP and trade. Mega-regionals, in other words, are PTAs on steroids.

The two major mega-regionals are the Trans-Pacific Partnership (TPP), which has been signed but not yet ratified by member countries, and the Trans-Atlantic Trade and Investment partnership (TTIP), which is currently being negotiated.

India is not part of these groupings (although it has its own PTAs with members of TPP and TTIP) and will hence be outside these large trade zones.

Consider the possible impact of the TPP. The World Bank estimates that by 2030 the TPP will raise member country GDP by 0.4-10 percent, and by 1.1 percent, on a GDP-weighted average basis, mainly owing to measures to reduce non-tariff barriers. Vietnam and Malaysia would be amongst the TPP member countries benefiting the most.

At the same time, the Bank also estimates that non-members will suffer a marginal reduction in GDP. For example, activity in Korea and Thailand could be set back as a result of shrinking market access and greater competition in export markets.

Perhaps surprisingly, some non-member countries such as Russia could benefit, because standards in export markets will be harmonised. In India’s case, the effect on exports is marginally positive, but its effect on the country’s GDP is about -0.2 per cent.