The Prime Minister, Narendra Modi met a team of scientists from the Laser Interferometer Gravitational Wave Observatory in Washington DC. The team, which was led by the Director of the National Science Foundation Dr. France Cordova, included three young Indian scientists who have worked on the LIGO project.

The Prime Minister also witnessed the exchange of an MoU on the establishment of Laser Interferometer Gravitational Wave Observatory (LIGO) in India. The agreement was signed earlier in the day by Dr. France Cordova, Director, US National Science Foundation, and Dr. Sekhar Basu, Secretary, Department of Atomic Energy, India. 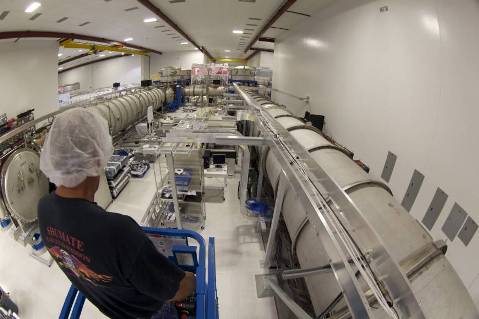 The Laser Interferometer Gravitational-Wave Observatory (LIGO) is designed to open the field of gravitational-wave astrophysics through the direct detection of gravitational waves predicted by Einstein’s General Theory of Relativity.

LIGO’s multi-kilometer-scale gravitational wave detectors use laser interferometry to measure the minute ripples in space-time caused by passing gravitational waves from cataclysmic cosmic sources such as the mergers of pairs of neutron stars or black holes, or by supernovae.

LIGO consists of two widely separated interferometers within the United States—one in Hanford, Washington and the other in Livingston, Louisiana—operated in unison to detect gravitational waves.

LIGO is a national facility for gravitational-wave research, providing opportunities for the broader scientific community to participate in detector development, observation, and data analysis. The capabilities of the LIGO detectors were greatly improved with the completion of the Advanced LIGO project in late 2014.

The responsibilities of LIGO Laboratory include operating the LIGO detectors, research and developent aimed at further improving the capabilities of the LIGO detectors, research in the fundamental physics of gravitation, astronomy, and astrophysics, and public education and outreach. LIGO is funded by the U.S. National Science Foundation and operated by the California Institute of Technology (Caltech) and the Massachusetts Institute of Technology (MIT).