In its 31st flight (PSLV-C30), India’s Polar Satellite Launch Vehicle successfully launched ASTROSAT, the country’s Multi Wavelength Space Observatory along with six foreign customer satellites into a 644.6 X 651.5 km orbit inclined at an angle of 6 deg to the equator. The achieved orbit is very close to the intended one. This was the 13th consecutive success for PSLV.

PSLV was launched today in its heaviest ‘XL’ version with six strap-on motors of the first stage. The launch took place from the First Launch Pad at the Satish Dhawan Space Centre SHAR (SDSC SHAR), Sriharikota, the spaceport of India.

The 320 tonne, 45 m tall PSLV-C30 carrying seven satellites including the 1513 kg ASTROSAT, lifted off at 10:00 Hrs IST. About twenty two minutes after lift-off, ASTROSAT was successfully placed in orbit and separated from the fourth stage of PSLV-C30. The separation of all the six co-passenger satellites was completed in the subsequent three minutes. The seven satellites carried by PSLV-C30 together weighed about 1631 kg at lift-off.

After a 50 hour smooth count down, the 320 ton PSLV-C28 was launched with the ignition of its first stage. The important flight events included: 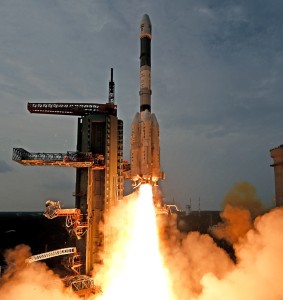 Through 30 successful flights during 1994-2015 period, PSLV has launched a total of 84 satellites including these seven satellites. The vehicle has repeatedly proved its reliability and versatility by successfully launching satellites into a variety of orbits including polar Sun Synchronous, Geosynchronous Transfer and Low Earth orbits of small inclination thereby emerging as the workhorse launch vehicle of India.

So far, 51 satellites have been launched by PSLV for customers from abroad. This latest launch of six co-passenger satellites by PSLV-C30 was facilitated by Antrix Corporation Limited, the commercial arm of the Indian Space Research Organisation (ISRO), a government of India Company under the Department of Space (DOS).

Soon after its separation from PSLV-C30, the two solar arrays of ASTROSAT were automatically deployed and the Spacecraft Control Centre at the Mission Operations Complex of ISRO Telemetry, Tracking and Command Network (ISTRAC) at Bangalore took control of ASTROSAT.

ASTROSAT was realised by ISRO with the participation of all major astronomy institutions including:

ASTROSAT is India’s first dedicated multi wavelength space observatory. This scientific satellite mission endeavours for a more detailed understanding of our universe. One of the unique features of ASTROSAT mission is that it enables the simultaneous multi-wavelength observations of various astronomical objects with a single satellite.

ASTROSAT will observe universe in the optical, Ultraviolet, low and high energy X-ray regions of the electromagnetic spectrum, whereas most other scientific satellites are capable of observing a narrow range of wavelength band. Multi-wavelength observations of ASTROSAT can be further extended with co-ordinated observations using other spacecraft and ground based observations. All major astronomy Institutions and some Universities in India will participate in these observations.

ASTROSAT has a lift-off mass of about 1513 kg. The science data gathered by five payloads of ASTROSAT are telemetered to the ground station at MOX. The data is then processed, archived and distributed by Indian Space Science Data Centre (ISSDC) located at Byalalu, near Bangalore.

The scientific objectives of ASTROSAT mission are:

Five payloads of ASTROSAT are chosen to facilitate a deeper insight into the various astrophysical processes occurring in the various types of astronomical objects constituting our universe. These payloads rely on the visible, Ultraviolet and X-rays coming from distant celestial sources.